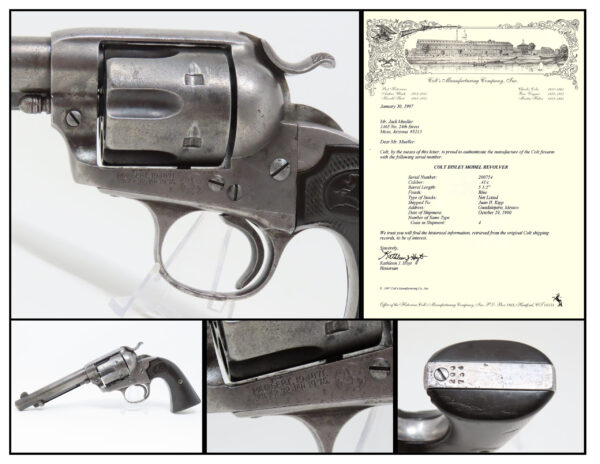 Here we present a Colt Bisley Model Single Action Army Revolver in .41 Colt, manufactured in Hartford, Connecticut and shipped to Juan H. Kipp in Guadalajara, Mexico 29 October 1900 in its current configuration along with 3 others per the accompanying Colt Archive Letter. Mr Kipp had the largest store in Guadalajara, Jalisco. John Harvy Kipp AKA Juan H. Kipp, was originally from Amsterdam, spent some time in New York, before finally moving to Guadalajara. He Latinized his name after living in Mexico for a few years. Kipp also imported firearms for Parker Brothers. Mexico, then as now, was in a cyclical state of turmoil with competing political factions and numerous rebellions. Guadalajara, the capital of the Mexican state of Jalisco, was no exception. Not long after this revolver was shipped began the Mexican Revolution of 1910. This gave rise to the likes of Pancho Villa (1878-1923) as a popular revolutionary, even as it precipitated the fall of Porfirio Díaz (1830-1915). In 1914, Villa would ride into Guadalajara and demand a sort of ransom from the upper crust in the city and give it to his supporters in the area.

This is an example of the Bisley variant of the Colt Single Action Army revolver. The primary differences were a lower hammer spur and a more curvaceous grip frame. These were optimized toward target shooting but many general users and shooters who were not simply target shooters preferred them as well. This one comes in a rare .41 Colt chambering, which was a manstopper in its day. Out of 44,350 Bisley revolvers made, only 3,159 were chambered for .41 Long Colt cartridges.

The overall condition is Very Good. The action is functional. The bore is shiny bright with nice rifling. The numbers match throughout. The grips are whole and sound. This pistola was certainly carried and used but it remains in really nice shape. With a letter and a scarce chambering, this is a very collectible Colt!