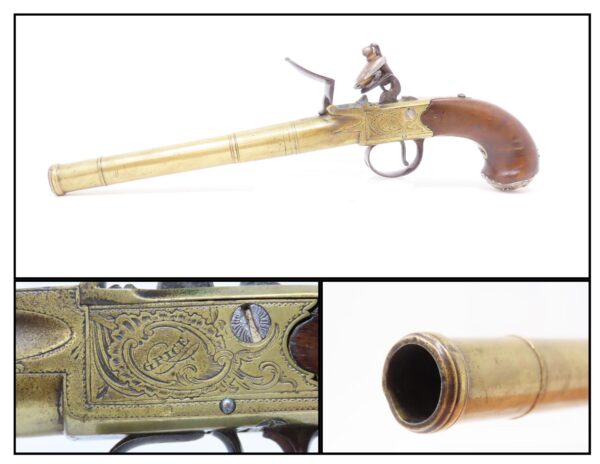 Here we present an antique William Grice of London Brass Flintlock Pistol with the Grotesque Mask Pommel, made circa the late 1700s in London, England. William Grice was a successful gunmaker who, according to his will, owned shops in London and Birmingham. His son Joseph inherited his business. “I give to my said son Joseph aforesaid all my Tools and Fixtures in my warehouse in Birmingham aforesaid also all my tools and fixtures in my Shops.”

William’s firm is best known today for supplying the first British rifles for the British army against the American rebels, as he established the “pattern” for the rifles from a German model, then supplied two hundred of the eight hundred rifles supplied in London and Birmingham by four gunmakers in all.

This pistol features a large .60 caliber bore, typical of a small arm of the period. This would have been one of the latter large, smooth bore flintlock pistols to be made before pistols in the percussion firing system and then shortly after cartridge firearms were introduced and adopted. This would have likely been carried in a holster or possibly a deep trench coat pocket of a gentleman walking the city streets of London for self-defense, and one wouldn’t want to be on the receiving end of this massive, big bore pistol!

The overall condition is near fine. Strong action. Good smooth bore. Solid walnut grip that still remains firm at the frame. Engravings are sharp. The barrel unscrews for easy breech loading. This pistol was certainly used in its day but remains a very handsome specimen of a sidearm from the Revolutionary period!