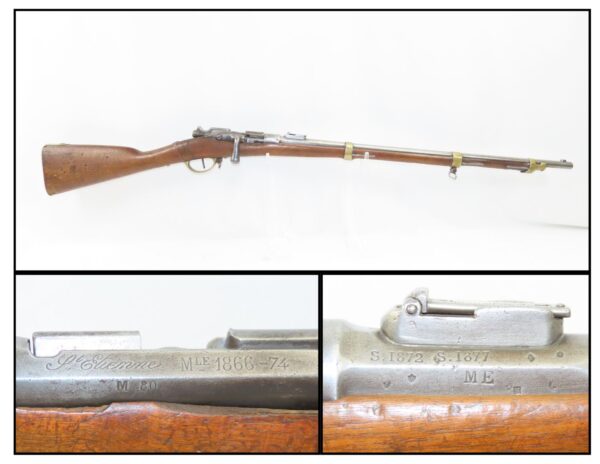 Here we present an antique Model 1866-74 Chassepot Bolt Action Rifle, made circa 1872 at the arsenal in St. Etienne, then updated to accept metallic cartridges instead of paper. This rifle gets its name from the inventor, Antoine Alphonse Chassepot. His third iteration, featuring the needle fire system similar to that of the Prussian Dreyse, was adopted by the French military, and subsequently used in the Franco-Prussian War. This was the very beginning of the bolt action rifle era, and soon virtually every military the world over would be armed with long arms along these lines. The Mauser brothers were on the cusp of making their appearance internationally as this small arms race between France and Germany heated up. The Prussians, the victors of the nearly year-long conflict, would go on to replace their needle-fire, bolt action rifle, the Dreyse, with the Model 1871/84. The French would update the Model 1866 to accept metallic cartridges and also adopt the new Gras in 1874. This would continue through the Great War and beyond.

This rifle is marked “Mle 1866”, clearly a mark original to the gun, then a much more distinct “-74”, indicating that this rifle was updated with the Gras Conversion for accepting metallic cartridges. The left side of the receiver is marked “M. 80”. The barrel is marked “S.1877” very likely the date that this rifle saw updates or arsenal work.

The overall condition is good. Strong action. Good bore. The stock has seen better days and contains a few repairs around the barrel tang. The right buttstock has a few random punch dots. There is some chipping on the stock at the muzzle end.