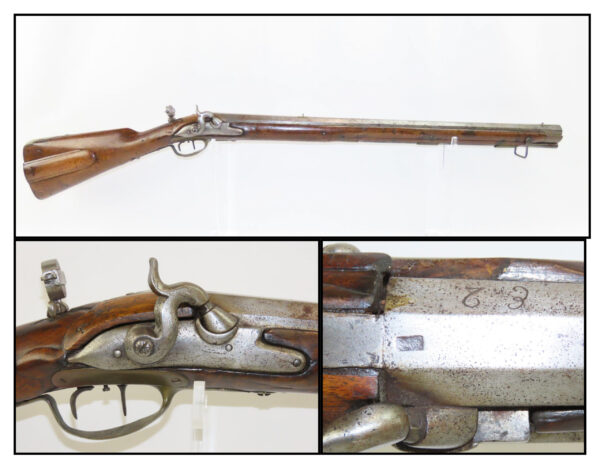 Here we present an antique Germanic Jaeger Percussion Rifle, made circa the mid-19th century. What is now recognized as the Jaeger type of rifle, goes back to at least the early 17th century. It is characterized by its short overall length, robust octagonal barrel and usually a substantial butt stock with raised cheek pieces and a patch box. This made it very handy to carry and load for the forester or hunter where it originated in the Hesse and Bavaria regions of Germany. In fact, the jaeger was very influential in the design of what is now considered the American (Kentucky/Pennsylvania) Long Rifle. This was due to the jaeger’s use by some of the Hessian mercenaries during the American Revolutionary War, as well as the number of German immigrants that congregated in Pennsylvania in the 18th century. In addition, several countries liked the concept of the short jaeger rifle so much that they designed their military long arms after it.

This example was likely made in the mid-19th century in Germany. It utilizes a percussion firing mechanism. It has a short, 27-3/4 inch octagonal barrel with a very large bore of .64 caliber. The wood stock is nicely carved and features a sliding patchbox. There is a barrel tang mounted peep rear sight and a post front sight. Double set triggers. A faint maker’s mark on the top of the barrel with what looks like “E2” engraved by hand on the side.

The overall condition is good. The action is strong. The bore remains in good shape with nice rifling. Here is a super refined muzzle-loading rifle from the Germanic states in the 19th Century!