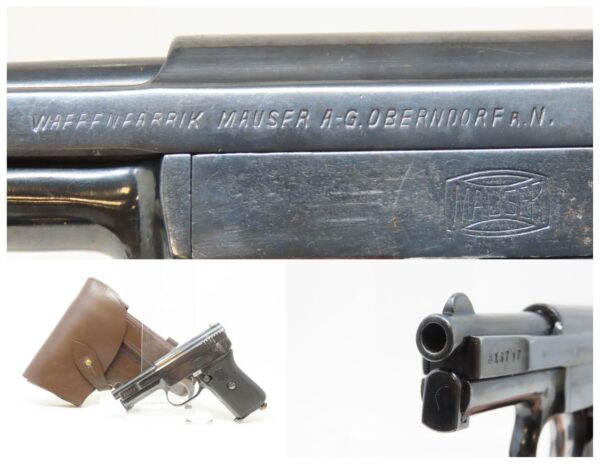 The first variant of the Model 1910 was the “Side Latch”, which featured a rotating side-latch just above the trigger which enabled the cover over the side of the lockwork to be removed for cleaning. The second variant, as is this example, was the “New Model” typically referred to as the “Model 1910/14” because it first appeared in 1914. The original side-latch model created some potential problems when field stripped as the trigger could be removed but would be difficult to replace because of the spring pressure on it. The New Model eliminated this issue and provided some other changes to the lockwork including improvements to the interrupter mechanism, and the magazine and slide stop mechanisms. The New Model’s change to the striker mechanism also made it easier to determine if the pistol was cocked.

Paul Mauser’s vision for his new semi-automatic pistol was to create a design that could be essentially scaled up or down to suit the cartridge it was to be used for. These designs were most probably created by an engineer named Josef Nickl whom Mauser had employed in 1904. Nickl produced designs for pistols in 9mm Parabellum, .45 ACP, 7.65 Automatic (.32ACP) and 6.35mm (.25ACP). The development of Paul Mauser’s small pistols was well underway by around 1908, around this time he told the Deutsche Versuchs-Anstalt für Handfeuerwaffen (the German Experimental Laboratory for Handguns) that his company would be producing a small 7.65mm pistol “That would not be larger in weight and size than the well-known Browning 7.65 pistol”. The pistol we now refer to as the Mauser “Model 1914” was the 7.65mm (.32ACP) version and development work on it began after the “Model 1910” was in production. The design of the pistol was almost identical to that of the 6.35mm “Model 1910” but scaled for the larger and more powerful .32ACP cartridge.

Despite the fact that Mauser’s company did not actually refer to their designs by model, but rather by caliber, so the two smaller Mauser pistols that were produced in large quantities have tended to be referred to by collectors by model year. The Model 1910 is the nomenclature applied to the smallest of these handguns that was chambered for the 6.35mm cartridge (.25ACP) and the Model 1914 model name for the 7.65mm (.32ACP) pistol.

The overall condition is good. Strong action. The bore is in good shape and remains slightly frosted. Sharp markings. Fine grip with light handling wear. This example has been refinished and includes a nice modern holster.