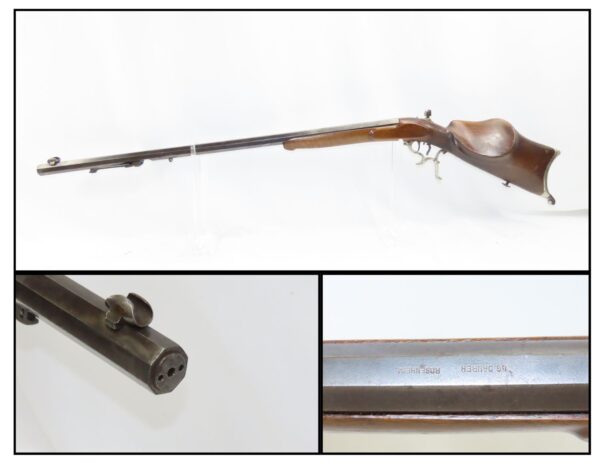 Target Shooter from the Early 1900s!

Here we present a C&R G.G. Daurer Zimmerstutzen Parlor Rifle, made circa the early 20th century in Rosenheim, Germany. The Zimmerstutzen, or parlor target rifle, is a product of the society of the 19th century when shooting was at its peak the world over. It was developed in parallel with the centerfire Schutzen rifle, but unlike those early black powder cartridge rifles, which evolved from earlier target muzzleloaders, the Zimmerstutzen was not an outgrowth of anything. It came into being suddenly, in the period immediately following the invention of the rimfire cartridge.

It is not incorrect to assume that the popular rimfire Flobert parlor guns had an influence on the Zimmerstutzen. But, where the Floberts tended toward the amusement trade, Zimmers remained rigidly within the sport of precision offhand target shooting. Zimmerstutzen were very popular in the late 19th and early 20th centuries. Most used ammunition that only used the primer as the propellant. These were very low velocity firearms and cartridges, making them relatively safe and quiet to fire indoors.

The overall condition is very good. Strong action. Good bore. The stock is solid throughout. Markings are sharp.