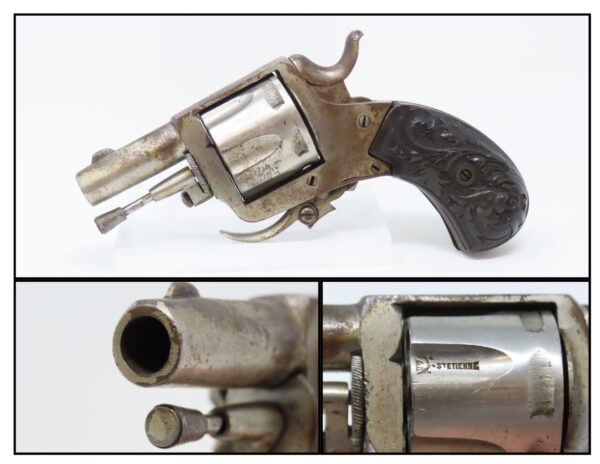 Here we present a C&R French Folding Trigger Pocket Revolver, made at the French State Arsenal St. Etienne circa the turn of the century. The arsenal produced arms such as swords from medieval times to 1764 and became a primary French firearms production facility. It produced arms all the way through the World Wars and finally closed in 2001.

The years following the American Civil War saw the rise of a host of companies that produced small, inexpensive metallic cartridge handguns. Many of these were produced overseas in Europe. Product lines ran from copies of firearms by established American manufacturers. This diminutive revolver is equipped with a folding trigger for even further compact stowage. This would have been a great concealed carry revolver at the turn of the century!

The overall condition is good. Original nickel finish. The action is strong. The bore is in good shape. Th grips are firm and in good shape with traditional floral designs that feature a dragon like creature. “ST ETIENNE” is engraved in one cylinder flute.