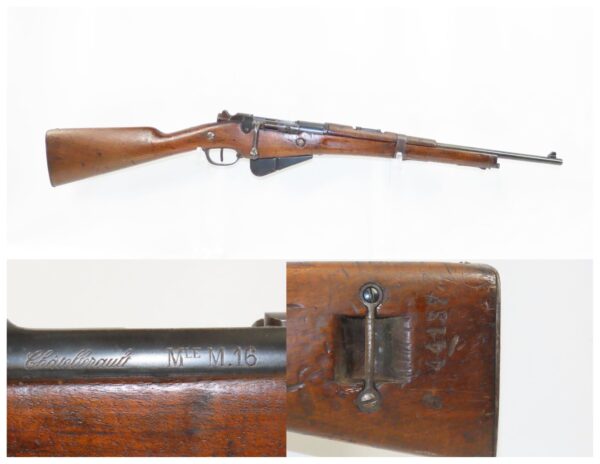 Here we present a C&R French Chatellerault Berthier-Mannlicher Model 1916 Carbine made circa the World War I era at the French military armory in Chatellerault, France. During the early stages of the war, it was quickly recognized that the Model 1907 Berthier’s three-shot magazine was simply too small in comparison to foreign weapons, requiring too-frequent reloading. Additionally, it was found that trench mud and grit could enter the weapon through the opening in the bottom of the magazine. To correct these issues, the Model 1916 Berthier rifle was introduced with a five-round en-bloc clip. The clip discharge opening at the bottom of the protruding magazine was replaced by a spring loaded trapdoor to keep out dirt and debris. This improved 5-shot design was then fitted to existing rifles and carbine-length Berthier models.

Many Model 1916 rifles and carbines were produced too late to see service in World War I, but were used after the war, particularly in colonial service. Berthier rifles and carbines continued in service during the Second World War in all branches of French service, including infantry and mounted units. Colonial and Foreign Legion forces in particular continued to use the Model 1916 Berthier due to a shortage of the new MAS-36 bolt-action rifle. Despite the advent of the MAS-36, the French Army did not have enough of the new rifles to equip even half of its frontline interior troops. Berthier Model 1916 5-shot rifles and carbines saw action in both France and Norway. After the fall of France in 1940, the Berthier could be found in service with both Vichy and Free French units.

The overall condition is good. Original finish. The action is excellent. The bore is bright with sharp rifling. The stock shows much use and remains solid. The magazine cover underneath does not stay shut. The front barrel band is absent.