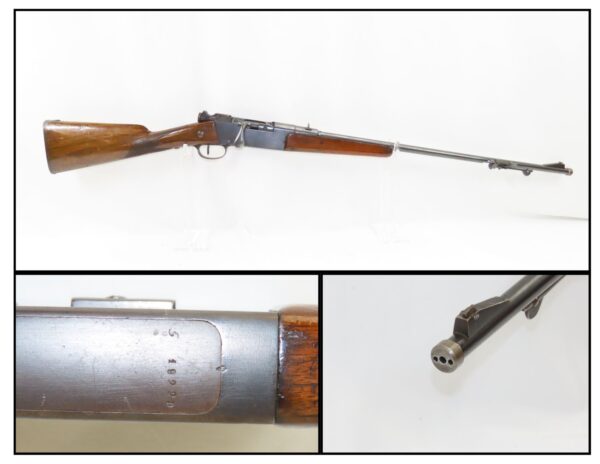 Here we present an antique French Mle 1886 M. 93 made circa the early 1900s at the armory at Chatellerault in France. The Model 1886 has the distinction of being the world’s first military firearm to utilize smokeless powder ammunition that was invented by Frenchman Paul Vieille in 1884. This rifle had quite a long service life during a time of constantly evolving firearms technology. It was utilized from 1886 through World War II, but is primarily associated with World War I.

The Model 1886 featured a tubular magazine, magazine cutoff on the bottom right side of the frame, and long range sights out to 2400 meters. For a short time, the 1886 gave the French infantry a range advantage over the rest of Europe. These were also issued with a 20 inch spike bayonet, called the “Rosalie” by French troops. The rifle has markings all over. The frame is marked “Manufacture D’Armes/Chatellerault” and “Mle1886 M 93” on the left side.

This example has been converted to a .17 Caliber Zimmerstutzen rifle, likely to be used for training purposes for the French military.

The overall condition is very good. Strong, smooth action. Good bore. The stock is solid with an expected amount of wear and contains mostly sharp checkering. Markings on the left side of the receiver are obfuscated.