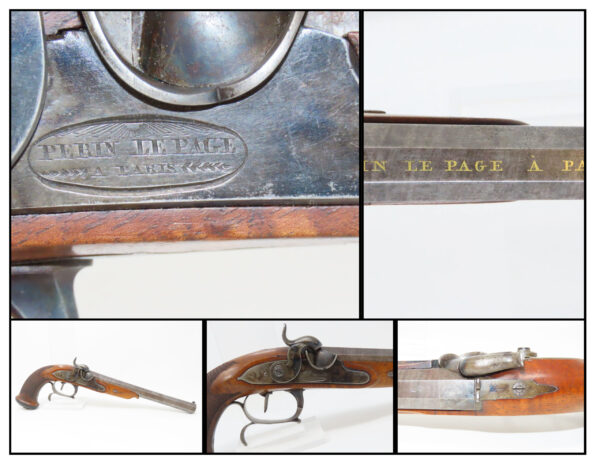 Here we present an antique Perin Le Page Dueling Pistol in .54 Caliber, made circa 1830-1840 in Paris, France. This example is a period conversion from flintlock to percussion when the more reliable percussion firing system was introduced. This purpose-built dueler has many of the attributes that one would desire in a refined target pistol, including: a swamped (flares toward the muzzle) octagonal barrel, good barrel-mounted sights, finger spur on the trigger guard, low bore axis, hand-checker stock, and single set trigger. This one has a twist barrel with “—PERIN LE PAGE A PARIS—” marked in gold on the top flat. The bore is .54 caliber with very fine rifling—40 groove. The numeral “2” is also present and it is almost certain that its mate was number 1. The pommel cap, trigger guard, sideplates, and lock are all case colored. “PERIN LE PAGE A PARIS” is also graven within an oval on the center of the lock plate.

Duels in the European tradition were fought as a matter of honor or to settle personal grudges. The practice is at least as old as the Middle Ages when duels were fought with swords. Duels in the 17th, 18th and 19th Centuries would see the rise of the pistol in settling these matters and strict rules were made surrounding the practice. Pistols were carefully and identically loaded, and each duelist was offered his choice of the indistinguishable loaded pistols. As duels were generally fought at short distances which were paced out, typically 35 to 45 feet between stationary opponents.

Louis Perin (Perrin) married into the distinguished Le Page family of gunmakers. Pierre Le Page (1709-1783) worked for, then inherited his shop from Louis Pigny, circa 1743. He would count the House of Orleans and King Louis XV among his clientele. His nephew, Jean Le Page (1746-1834), would inherit the business from his uncle circa 1779. He would grow to have his own prodigious legacy with French royalty, counting King Louis XVI, Napoleon Bonaparte, and King Louis XVIII among his patrons. His work was incredibly elaborate and stands as some of the most astounding gunmaking in history. Perin was a gunmaker from Poitiers circa 1813-1830 before moving to Paris to set up shop under the name Perin Le Page.

The overall condition is fine. Original gold, Damascene twist, and case colors. The action is excellent—the single set trigger is very light and has a crisp break. The trigger is functional both when set or not. The bore is fine with sharp rifling. There is a minor crack to the ebony pommel cap that is stable. This is an incredibly sharp pistol that will catch eyes when on the range or on display. A very classy pistol.