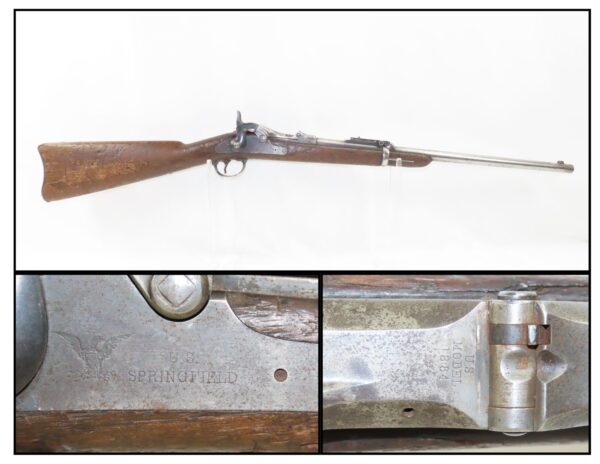 Here we present an antique U.S. Springfield Model 1890 Trapdoor Rifle, made by Springfield Armory. This carbine is an authentic firearm used by both the New York Motion Picture Company and Fox Film as a movie prop. The NYMPCo was in business under that name from about 1909 until about 1915, when the company merged with (or was integrated into) Keystone Studios and moved to California. This might have been when Fox Film came to own this piece as they were also in New York and began in 1915. Fox Film would move out to California in 1925. Fox Film would continue to grow and would merge with 20th Century in 1934 to make 20th Century Fox. NYMPCo both distributed and made films under the trade names of 101 Bison (this one is particularly interesting for its partnership and use of 101 Ranch in Ponca, Oklahoma), Kay-Bee, Broncho, Domino, and Reliance. Interestingly, there was a brief merger with Universal Film Mfg. Co. in 1912, but there was strife and the NYMPCo backed out, while Universal continued to use the 101 Bison name to sell films. There were many, many Western films made during this period, some of them still available and some lost to history when the originals were misplaced or burned up in fires. This carbine is marked “N.Y. M.P. CO.” on the left side of the stock, as well as “FOX” on the receiver and “FOX FILM” on the bottom of the stock. There is also a faint “GPC” stamp right over the circle “P” stamp on the bottom of the stock, alluding perhaps to a third picture company owner.

This rifle was manufactured in 1887, around the Indian the end of the Indian Wars and just before the Wounded Knee massacre. These so-called “Model 1890” carbines are actually Model 1873, 1877, and 1884 carbines that were altered by fitting front sight protectors and fitting a special barrel band that cradles the top of the rear sight ladder and protects it from snagging or being struck. This example is a Model 1884 and has the standard 1884/1890 features. These upgraded features include an unmarked stock replacement with a compartment for the cleaning rod and a broken shell extractor, a butt plate with a sliding access cover, a Buffington rear sight with a carbine “C” marking on the sight leaf, and a rear sight protector. It is believed that these upgrades were undertaken at Fort Riley, Kansas.

This carbine has been there and done that. Its stock shows a lot of use, probably due to the fact that it did get used a lot, though not by people whose lives depended on the condition of their weapon. Robust action. The bore is dim. This is a piece that we decided to leave in its present state. It could be cleaned up significantly, but this is a relic of a different sort, and we will let the new owner decide what they will do with it! An incredible piece of early motion pictures, film studios, Hollywood, and Western history!