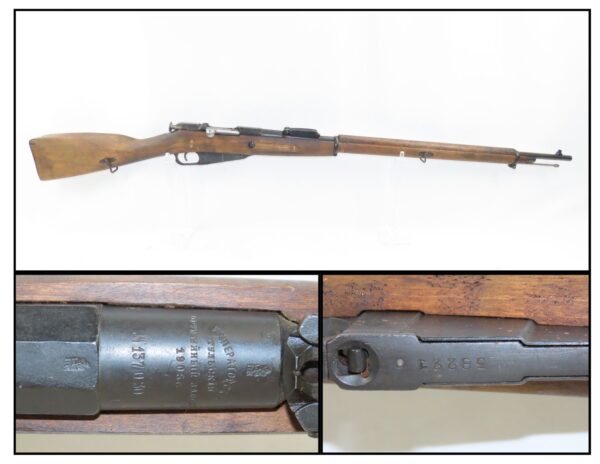 Here we present a C&R Imperial Russian Model 1891 Mosin-Nagant Rifle built in 1905 at the Tula Arms Plant in Tula, Russia. The Imperial Tula Arms Plant was a Russian weapons manufacturer founded by Tsar Peter I of Russia in 1712 in Tula, Tula Oblast as Tula Arsenal. Throughout its history, it has produced weapons for the Russian state. Its name was changed from Tula Arsenal to Tula Arms Plant during the Soviet era.

When Finland achieved independence from Russia in late 1917, over 190,000 Model 1891 infantry rifles were already stockpiled in the ex-Russian military depots within Finland. As a result, the rifle was adopted as the standard Finnish Army weapon, and surplus Mosin–Nagants were purchased from other European nations which had captured them during World War I. These rifles were overhauled to meet Finnish Army standards and designated M/91. The M/91 was the most widely issued Finnish rifle in both the Winter War and the Continuation War.

The Model 1891 known in the West as the Mosin–Nagant and in Russia as Mosin’s rifle is a five-shot, bolt action, internal magazine fed military rifle that was developed from 1882 to 1891 and used by the armed forces of the Russian Empire, the Soviet Union and various other nations including Finland, such as this one. It is one of the most mass-produced military bolt-action rifles in history with over 37 million units having been made since its inception in 1891, and, in spite of its age, it has been used in various conflicts around the world up to the present day.

The overall condition is very good. Strong action. The bore is in nice shape. Solid stock with an expected amount of wear, no major damage. The stock has the finger and groove splice Finnish modification. The left side of the receiver has the “SA” Finnish Army marking. The right side of the butt stock has a “Z” within a circle with crossed spears. The barrel and bolt numbers match.