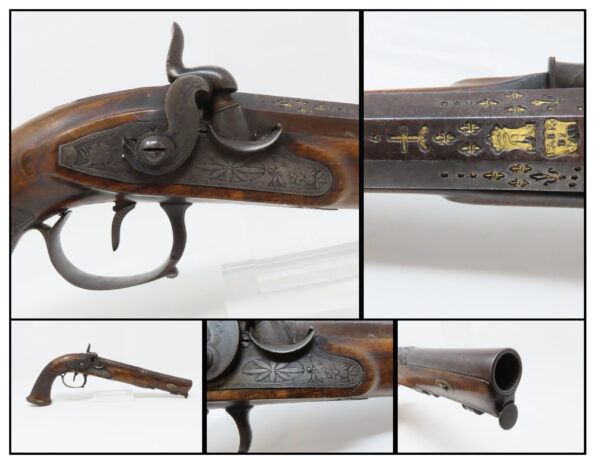 Here we present an antique Spanish Miquelet Belt Pistol, made circa the late-18 or early-19th Century in Spain. The miquelet was an early and sturdy form of flintlock popular throughout Europe and the Ottoman Empire from the seventeenth into the early twentieth century. This one was originally made as a flintlock and was updated to the percussion firing system sometime after its invention, circa 1820s-1840s. This pistol is beautifully made and remains in fine condition. It features delicate engraving throughout to include the lock, hammer, trigger guard, barrel and barrel tang. The barrel begins octagonally and transitions to round near the midpoint, with the transition marks by a ring and neat embellishment. The muzzle flares slightly. One of the most attractive parts of this pistol are all the Spanish maker’s marking and embellishments which have been filled with gold to highlight them. This includes the maker’s mark which is “FABR (fabrica or made) DI NAR”, this under another larger marking with a large crowned “R” with small flor de lis and a cross surrounding. The trigger guard has a broad space along the bottom of the bow that made a perfect canvas for the artist and contains a hunting dog; there is a decorative finial that extends just past the lockwork from the trigger guard that is engraved with tropical floral motifs coalescing around a perched bird. Iron furniture throughout. This one was made with no provision for a front sight but there is a small gutter-style rear sight for quick and close sight acquisition. The stock is hand-checkered on the vertical pistol grip, and there is a seashell-style cap trap in the pommel. Bored for a .68 caliber manstopper, one wonders who carried it and where it has been. Such a pistol may have been owned by a Spanish noble or military officer or even a pirate!

The overall condition is very fine. The action is strong and tight. The bore is smooth. Much of the original finish remains, including case colors at the barrel tang and the gold used to color the barrel markings. This is a fabulous piece of art, history and weaponry!