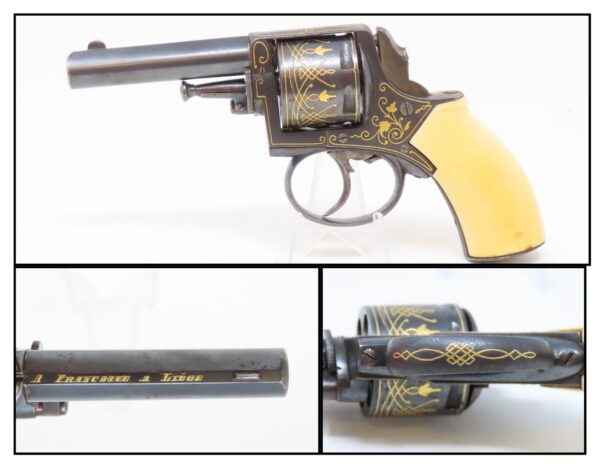 Here we present a nice example of an antique Auguste Francotte RIC Type Revolver made circa the late-19th Century in Liege, Belgium. Founded in Liege in 1810, the Francotte company established itself there, but it wasn’t until 1860 that the company became especially active. The company was one of the principal manufactures of weapons coming out of Liege from 1860 until 1914, when its activities were blocked by German Occupation.

By 1890, Auguste Francotte sported no fewer than 150 different revolvers. He also over the years produced licensed copies of Adams, Tranter, and Smith & Wesson revolvers. The Francotte company was also an important wholesaler, especially in the early 1880s, providing revolvers to wholesale houses in the United States, such as Sears & Roebuck and Montgomery Ward who would put their trade name on them. Only by disassembling the revolvers would one find the initials “AF” on the internal components.

The overall condition is near fine. Lovely blue finish with gold inlays throughout. The hammer spur was deleted, and a small golden triangle was mounted on the stump. The action is strong all the way around, although the trigger return spring is weak and the trigger needs to be reset manually. The bore is immaculate, remaining as bright as ever. The grip is seated firmly. “A FRANCOTTE A LIEGE” has been inlaid in gold a top the barrel. A very handsome pocket revolver from Francotte!