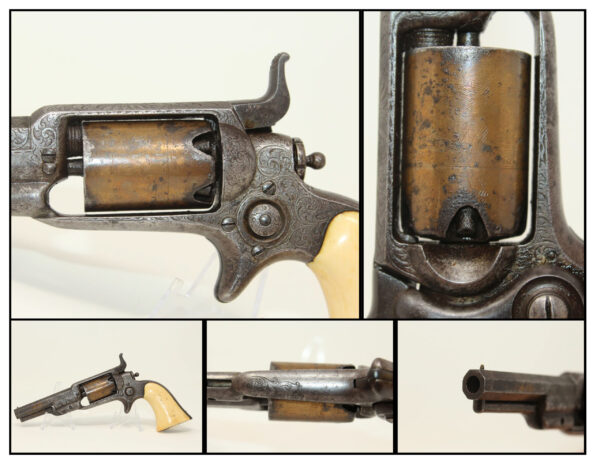 Here we present an antique Factory Engraved Colt Model 1855 “Root” Side-hammer Revolver, made in 1859 in Hartford, Connecticut. This Samuel Colt design was named for his factory superintendent Elisha K. Root and is a telling example of Colt’s desire to innovate, which was probably the single biggest factor in his success. Though the Colt 1849 Pocket had been introduced only 6 years prior, the “Colonel” attempted to make an improved pocket revolver. The Root features Colt’s debut of the “creeping” style of loading lever which allowed for better mechanical advantage when loading the gun, Colt’s first solid frame, a hammer mounted on the right side for access to the cylinder axis pin, and a cylinder axis pin which was the point at which the hand turned the cylinder (versus on the cylinder itself). Many good ideas were tested in this design and some would prove worthy to be used in the future. The small parts used in the Root Revolver’s mechanism proved quite fragile, however upscaling them into the 1855 series of Revolving Rifles and Shotguns seemed to help. Colt is even known to have experimented with the Root design on a Dragoon pistol, a precursor to the 1860 Army. Overall about 44,000 Root Revolvers were made from 1855-1870, much fewer than the 1849 Pocket with 340,000 produced.

This very nice revolver has fine factory scroll engraving on the frame, butt, back strap, loading lever and breech end of the barrel. It looks as though there was once a name engraved on the backstrap and this very well may have been a presentation piece to someone of note. Though much has worn off over the years, the gold washed finish is still visible throughout. Gorgeous ivory one-piece grip. The cylinder has the roll engraved Cabin and Indian scene. And, the top barrel flat has the Hartford address with the pointing hand motif. Interestingly, the number on the bottom of the grip and the barrel match and are “21021” while the number on the cylinder is exactly 1,000 numbers off and is “22021”. Was this a mistake on the engraver’s part? We will probably never know for sure, but we are inclined to think so.

The overall condition is Very Good. The action is strong and smooth. The bore is dark with age with sharp rifling. The engravings are finely detailed and elaborate. This one is a gem.