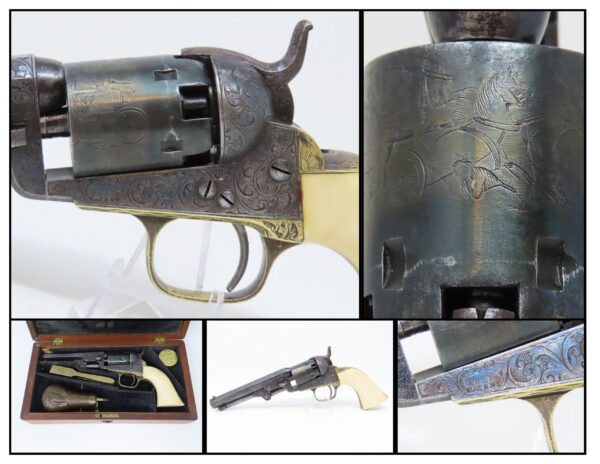 Here we present an antique Gustave Young Engraved Colt Model 1849 Pocket Revolver, made in 1860 in Hartford, Connecticut. The Model 1849 Pocket, the replacement for the Baby Dragoon, was the most widely produced of any Colt percussion pistol. Nearly 340,000 were manufactured during its 23-year production run that ended in 1873. Over 280,000 of these were produced by Colt’s factory at Hartford by the end of the American Civil War in 1865. These were very popular and saw a lot of use on the battlefield, on the home front and in the West. These were some of the smallest, handiest pocket revolvers of the time.

This piece was made during Gustave Young’s tenure with Colt’s. Young was born in Berlin, Germany (then Prussian) in 1827. He would begin working in his field at the age of 8, finish his apprenticeship by 14, emigrate to the US at the age of 19, and by the age of 25 begin working for Samuel Colt in Hartford, Connecticut. He would quickly become Colt’s primary engraver, developing his own unique style as well as supervising a team of engravers working under him (1852-1869). These are Young’s trademark motifs that you will observe throughout this piece, beginning with the dog’s head on the left barrel flat. The hammer, too, bears the likeness of a dog on each side. The interior terminus of each scroll usually blossoms into a flower. Each of the serial numbers is marked with an apostrophe ‘ , which was the Colt factory’s own notation from about 1854-1861 to indicate that the given piece would receive the special engraving and ivory grips. The case includes a cap tin, powder flask, and bullet mold as its contents.

The overall condition is very fine. The action is strong and tight. The bore is clean and mirror bright. Excellently preserved original blue, case color, and silver finishes. The numbers match and all markings are sharp. This is a true work of art from the shop of Gustave Young, Colt’s premiere engraver!