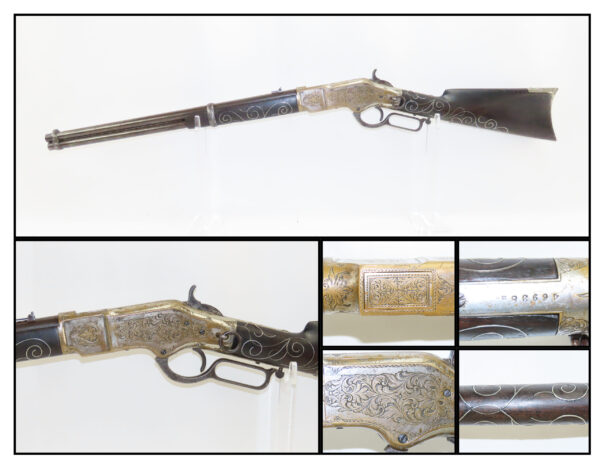 Here we present an antique Engraved Winchester Model 1866 “Yellowboy” Carbine, manufactured in New Haven, Connecticut in 1870. After the close of the American Civil War, the New Haven Arms Company became the Winchester Repeating Arms Company. One of its first orders of business was in revising and improving the Henry Rifle, which proved revolutionary to understate it. A new rifle was envisioned and became the lever-action repeating Winchester Model 1866. Known as the Yellowboy, due to its brass frame and hardware, this was the first Winchester lever action rifle. It remains iconic as the “gun that won the West”, being used by pioneers, Native Americans, cowboys, lawmen, and ne’er-do-wells alike. It is the cornerstone for many a historical collection.

It was revolutionary for its time, though it was based on the Henry Rifle that saw limited use during the American Civil War. Winchester improved upon the weaknesses of that design to make a very reliable, sturdy, and accurate rifle with a high volume of fire. The magazine tube became totally enclosed from the elements and the frame-mounted loading gate was introduced, allowing quick reloads and the ability to top off the magazine. The Model 1866 proved an immediate success for Winchester, with around 170,000 guns going on to be manufactured. The 1866 appeared in three forms for the mass market. They were the carbine, rifle, and the musket. The carbine, as is this rifle, made up 127,000 of the guns produced, making it by far the most popular.

The receiver, lever, buttplate tang and barrel bands of this ’66 feature engraving consisting of light and flowing floral designs and thin saw-tooth borders. The lifter is engraved with a double heart motif and the top of the butt plate tang and the right side of the frame in front of the loading gate also bear heart-shaped scrolls. The frame and the butt plate were then finished in nickel. Very unusual is the wire inlay in the stock. This work was almost certainly done by the retailer of this carbine. The barrel has the two-line Winchester address and King’s improvement patent dates.

The overall condition is fine. Lovely nickel finish. Blue turning dark with age and a patina making up the balance. The action is smooth and crisp. The bore is bright with sharp rifling. Most of the wire inlay remains. Here is a one-of-a-kind example of an icon from the West, a superb Winchester to collect and display!