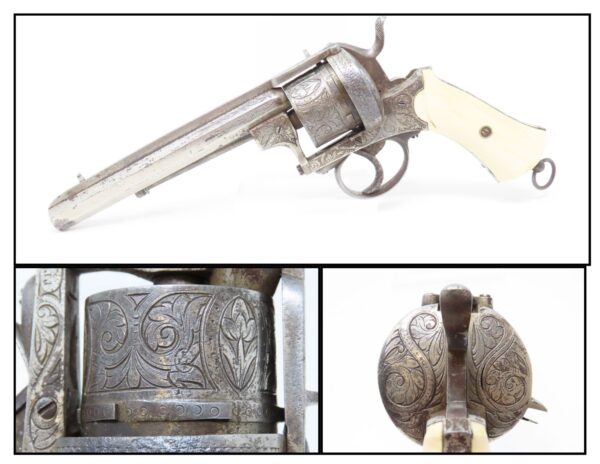 Here we present an antique European Pinfire Revolver, made circa the 1850s in Liege, Belgium. In 1830, notable gun maker and inventor Casimir Lefaucheux invented the pinfire cartridge and patented it in 1835 to become one of the first self-contained firearms cartridges. This early design included a case with ball, powder and primer, but what made it different from what was to come later in cartridge development was the “firing pin” that projected out of the side of the case. It was this pin that was struck and detonated the primer inside.

His son, Eugene, would build on Casimir’s invention, designing a pistol to take advantage of it. The hammer would be flat and smash down on the side of the cylinder, from which the pin of the cartridge would project. This revolver and pistol design would become prolific, especially in Europe throughout the 19th Century, being adopted by militaries, used by civilians and police, and even being sold for use during the American Civil War. Many makers made both licensed and unlicensed copies.

This one features engraving throughout and an octagonal barrel with a top rib. The “J.J.” marking is a maker’s mark likely for Joseph Julien. Very beautiful antique ivory grips. Lanyard ring. Double action and single action.

The overall condition is near fine. Original nickel finish. The action is strong all the way around in both double and single. The bore is in good shape. Both ivory grips are firm with a small chip missing from the bottom right grip. The traditional floral engravings remain deep and well-defined throughout. Here is a large pinfire revolver that is of superior quality and aesthetic!