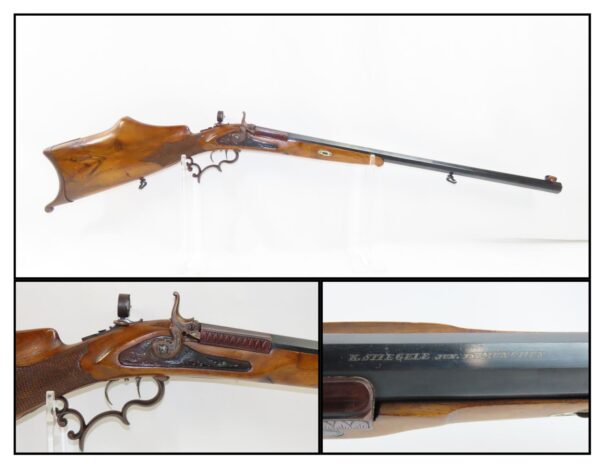 Here we present a C&R K. Stiegele Jr. Zimmerstutzen Parlor Rifle, made circa the early 20th century in Munich, Germany. Carl Antonin Stiegele started his business in Munich in 1837 followed by Karl Stiegele Sr. and then Karl Stiegele Jr. Their first products were Zimmerstutzen (Parlor Rifles) and Bolzenbuechsen (Dart Guns) for indoor shooting. In 1867 the company developed a new lock up that they were awarded a patent for, giving a substantial lift to the company which led to a new gun factory being built in 1868. The company exhibited at many Trade Shows and even at World Fairs, winning numerous awards for the quality and accuracy of their rifles. Stiegele was appointed a gunmaker of many kings, princes, and dukes. Most all production records were destroyed during the air raids in World War II and all guns and equipment were confiscated by American and Russian troops at the end of the war.

The Zimmerstutzen or parlor target rifle is a product of the society of the 19th century, when shooting was at its peak the world over. It was developed in parallel with the centerfire Schutzen rifle, but unlike those early black powder cartridge rifles, which evolved from earlier target muzzleloaders, the Zimmerstutzen was not an outgrowth of anything. It came into being suddenly, in the period immediately following the invention of the rimfire cartridge.

It is not incorrect to assume that the popular rimfire Flobert parlor guns had an influence on the Zimmerstutzen. But, where the Floberts tended toward the amusement trade, Zimmers remained rigidly within the sport of precision offhand target shooting. Zimmerstutzen were very popular in the late 19th and early 20th centuries. Most used ammunition that only used the primer as the propellant. These were very low velocity firearms and cartridges, making them relatively safe and quiet.

The overall condition is nearing fine. Strong action. Very good bore. The stock is solid despite the crack on the left side. The buttstock contains an exaggerated check piece adding to its aesthetic appeal. Here is a great parlor rifle example!