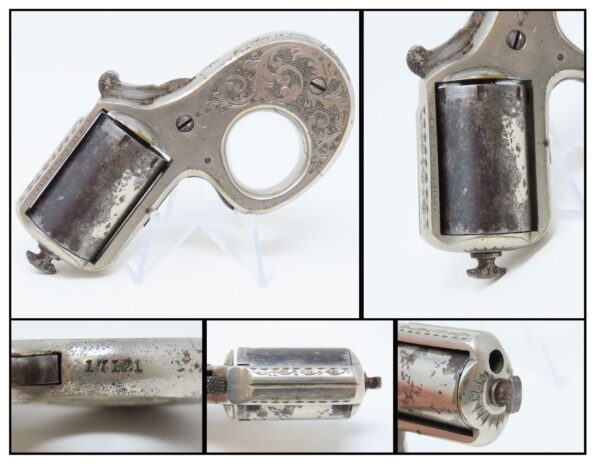 Here we present an antique James Reid Manufactory “My Friend” Knuckle Duster Revolving Pistol, made circa 1876. Only 3,100 of these were produced from 1870 through 1882, making them quite scarce. The maker, James Reid, was born in Belfast, Ireland, was trained as a gunsmith in Glasgow, Scotland, and then migrated to the United States where he first set up shop in New York City. In 1865, he moved his family and then his shop to Catskill to get out of the city and into the country for health reasons.

He kept a gristmill and his gun manufactory where he spent the next decade and a half producing his famous little gun and was successful in spite of the fierce competition of 1870s small arms manufacturing. This was a time when small, single action pocket revolvers were so plentiful that Colt could hardly compete. But this pistol had the seven shots of .22 and the ability to be turned around and used to knock some teeth out. Not a bad feature on a revolver for a rough and tumble end of the 19th Century. Certainly no wonder why it would be called “My Friend”. This specimen features an engraved brass frame. The cylinder holds 7 shots of .22 rimfire.

The overall condition is fine. Very nice nickel finish on the engraved brass frame. The numbers match. The action is strong all around. The bores are semi-bright, in good shape. The “My Friend” Knuckler by Reid is certainly one of the most interesting and relatively successful concepts for a combination weapon in its time!