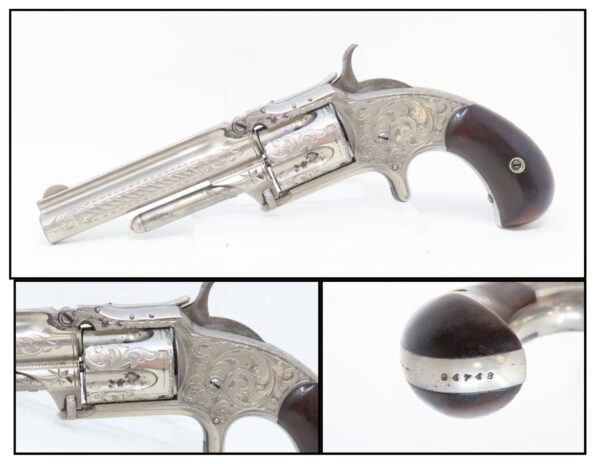 Here we present an antique Smith & Wesson Model Number 1-1/2 .32 Rimfire 2nd Issue Revolver, made circa 1868-1875 in Springfield, Massachusetts. The No. 1 was Smith & Wesson’s first metallic cartridge firearm. It utilized the idea of the “bored through cylinder”, which was patented by Rollin White and subsequently exclusively licensed by Smith & Wesson. This concept has forever changed revolving firearms design, and is the same idea used in revolvers today. S&W, via Rollin White himself, aggressively sued any patent infringers and were able to hold their monopoly on the American market for cartridge revolvers from about 1857 to 1870, whereupon their patent expired. The results were a very profitable business, a broke Rollin White, and a grudging U.S. Chief of Ordnance Alexander Dyer, who was still angry in 1870 about not being able to use the technology during the Civil War. The U.S. government ended up giving Colt their contracts since they valued the larger .44 caliber in the Colt 1860 Armies over the .32 caliber full sized No. 2 Armies.

The second issue of the Model ​1 1⁄2 can be identified by its fluted barrel and the rounded shape of the grip butt. Like the 1st Issue, it was also produced in blued steel and nickel-plated varieties, with most models having a ​3 1⁄2-inch barrel. 2nd Issue guns were serial numbered consecutively after the 1st Issue, with numbers ranging from approximately 26,300 through 127,000.

The overall condition is fine. Original engraving and nickel finish with some case colors still visible on the hammer. The action is excellent. The bore is in good condition. The rosewood grips are firm and remain in very good shape with expected handling wear. Here is a S&W revolver from the glory days of the Old West!