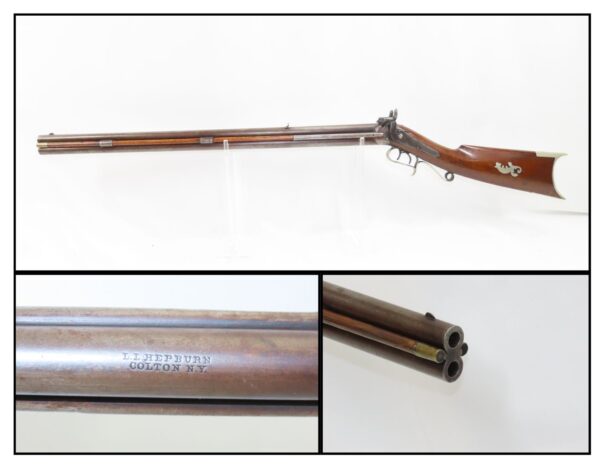 Here we present an Antique Lewis L. Hepburn Over/Under Percussion Double Rifle, manufactured circa the late 1850s to early 1860s in Colton, New York. The double rifle, also known as the double-barreled rifle, is a rifle with two barrels mounted parallel to each other. Synonymous with big game hunting in Africa and India, the double rifle is a purely sporting weapon with no military heritage.

Lewis Hepburn had at least three careers after he finished an apprenticeship: one as a country gunmaker of muzzle-loading rifles (this is one such rifle), another as a senior employee of E. Remington & Sons, for whom he designed the breechloading, single-shot action that bears his name and third, a career as the principal designer for the Marlin Firearms Company. He is credited for the design of the Model 1888 Marlin. He made custom muzzle loading sporting rifles on his own from 1858 through 1878 prior to going to work for Remington. While Superintendent of Remington’s Mechanical Department, Hepburn became a top-notch marksman and a member of the American Creedmoor International Shooting Team.

This Double Rifle features superposed barrels in .40 caliber. Each barrel has its own hammer, trigger, and ramrod for loading. The top of the barrel is marked “L.L.HEPBURN/COLTON, N.Y.”

The overall condition is fine. Strong action. The bore is very nice and reflective with sharp rifling. Beautiful stock with the trademark drop. Light engravings on the locks. The German silver escutcheons and butt plate is a nice feature. “C. ASHLEY” is stamped on the toe of the stock on the German silver plate. A great piece from upstate New York!