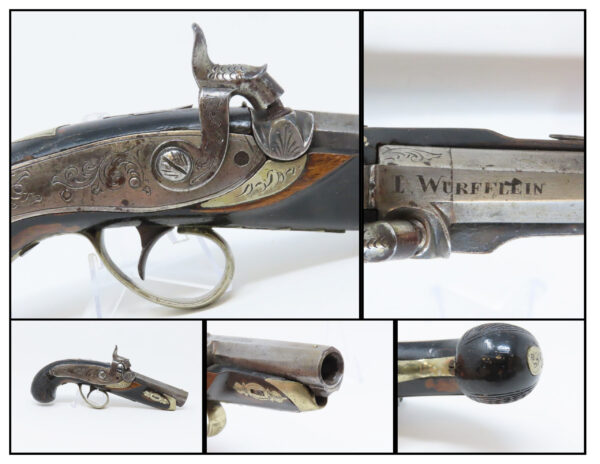 Here we present an antique Andrew Wurfflein Deringer Percussion Pistol, made circa the 1850s. Wurfflein arrived in New York from Germany in 1832 and settled in Philadelphia, Pennsylvania. By 1840, he was granted U.S. citizenship. In 1844, his brother John, also a gunsmith by trade, immigrated. They worked together for some time, and were two of the six that founded the Shuetzen Verein, a prominent German shooting club in Philadelphia. Their work included rifles and pistols, including close copies of their Philadelphia neighbor Henry Deringer’s hit pocket pistol.

Henry Deringer was a very successful Pennsylvanian gunsmith who started his own company in his early twenties, circa 1809. It was not until the 1850s that his prototypical “Deringer” percussion pistol became extremely popular. Once it did become popular, the basic design was copied in dozens of different shops. Not only was it copied, but Deringer’s good name was stamped on guns made by others, some of them not up to the quality standards of Deringer himself. The inventor was worried about protecting his good name, so he pursued and sued any of the counterfeiters that he could find and warned the buying public to beware of his spurious imitators. The name “Deringer” often invokes certain historical events, characters or moments in film. Deringer’s name has become both a noun and a catch-all term. President Abraham Lincoln was shot and killed with one of Henry Deringer’s pocket sized percussion pistols. They conjure images of the California Gold Rush, as well as riverboat gamblers, and bounty hunters. These pistols were very practical for the time, being small and concealable and of large bore size.

In his book “Guns of the Old West”, here is what Charles Edward Chapel had to say about the Deringer pistol:

“For a man in a tight spot, with an armed enemy only a few feet away, a pair of single-shot Deringer pistols was more effective than the multi-shot pepperbox. You either got your man at the first or second shot—if, indeed, you were given the chance to fire twice—or you got a fast funeral. That heavy-calibered little gun was a man-stopper at short range, an effective surprise weapon, an “equalizer” with which many a gold-camp David permanently tamed the muscle-bulging, belligerent Goliaths of the frontier. Included in a man’s personal arsenal, the pistol was carried either as a principal weapon or as a reserve to be used when revolver, pepperbox or Bowie knife failed.”

The overall condition is very good. The action is strong and tight. The bore is in good shape with good rifling. “J. WURFFLEIN” can be read atop the barrel. Between the engravings and the carved stock, this would make quite the eye-catching display piece!