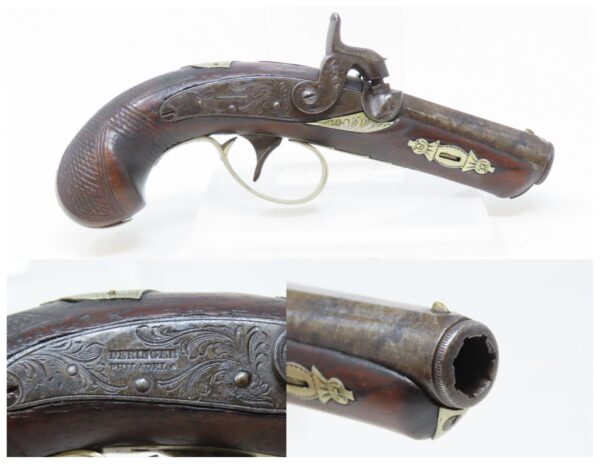 Here we present an antique Henry Deringer Rifles and Pistols Percussion Pistol, made circa the 1850s. Henry Deringer was a very successful Pennsylvanian gunsmith who started his own company in his early twenties, circa 1809. It was not until the 1850s that his prototypical “Deringer” percussion pistol became extremely popular. Once it did become popular, the basic design was copied in dozens of different shops. Not only was it copied, but Deringer’s good name was stamped on guns made by others, some of them not up to the quality standards of Deringer himself. The inventor was apparently very worried about protecting his good name, so he pursued and sued any of the counterfeiters that he could find and warned the buying public to beware of his spurious imitators.

The overall condition is very good. This one has a unique turned down and gnarled portion at the muzzle, which is the only one we’ve seen. Strong action. Good bore for its age. Excellent wood, nice checkering on the grip. Legible markings. This example sports traditional floral engravings. “P” marked on the left barrel flat with the zig-zag lines.