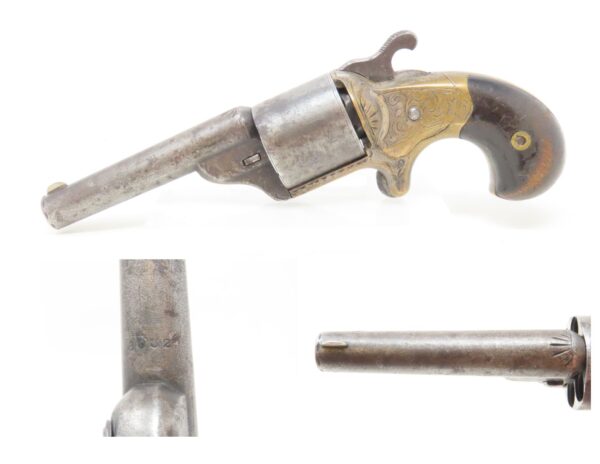 Here we present an antique Moore’s Patent Firearms Company Teat-Fire Revolver, made circa 1864-70, in Brooklyn, New York. It was wartime and the United States stood divided. During a period of rapid industrial innovation, the firearms industry was one of the hottest. The war drove a huge market and many different makers, designs and patents appeared in a very short amount of time. Some of Colt’s most coveted patents expired in 1857, opening opportunity, but Smith & Wesson purchased the Rollin White Patent in the late 1850s, enabling them to control the market on what virtually became the “modern” revolver. Specifically, the Rollin White Patent was for completely bored through (front to back) chambers in the cylinder. This is the same concept still in use in revolvers today. This enabled the most effective use of metallic cartridges.

Many companies simply infringed on the patent. They were promptly sued. Others tried and succeeded in finding ways around the patent to make metallic cartridge revolvers while the Rollin White Patent was still in effect. Daniel Moore, the designer of this revolver was one who did both. He designed a cartridge revolver that was the first “swing-out” cylinder revolver, but blatantly infringed on S&W’s patent. He was sued and lost, but he was not done. He soon designed another revolver with the partnership of David Williamson. That is the “teat-fire” revolver. Like the Plant, another successful revolver that skirted the RW Patent, it used a mostly bored through cylinder with a constriction at the back. The cartridges each loaded from the front of the cylinder. A small projection at the back of the cartridge (like a teat) was the primer.

This little spur trigger has a blade front and V-notched hammer rear sights and manufactured without the extractor. The cylinder is marked “D. WILLIAMSON’S PATENT JANUARY 5, 1864”. The top of the barrel is marked “MOORE’S PAT. FIREARMS CO. BROOKLYN, N.Y.”

The overall condition is good. The bore is in good shape for its age. Nicely engraved frame. The grips are in good shape containing an above average amount of wear. The action does not function due to a weak trigger return spring. Here is a nice example of a revolver design that made it around S&W’s Rollin White Patent!