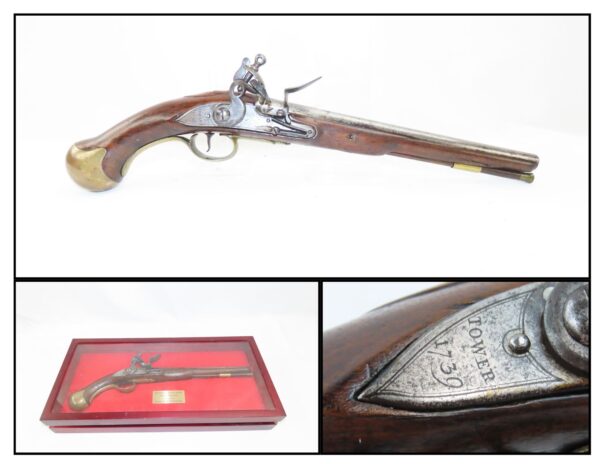 Here we present an antique English Sea Service (Long) Flintlock Pistol, made in 1739 in England. As weapons developed in land-based combat, the same was occurring on the high seas. In the 1730s, the flintlock became the standardized action for firearms which allowed for a more reliable mechanical operation, birthing a new generation of muskets and pistols. After being adopted for land-based combat, it was only a matter of time before the naval powers of the world would begin using these firearms for boarding actions when volleys of cannon fire would turn to close range hand-to-hand combat. The early British Navy used several different types of arms aboard their warships including this English Sea Service pistol, along with the conspicuous blunderbuss. It was in this era that Britain began moving in the direction of standardized small arms. This Sea Service pistol was in use by the Royal Navy throughout its wars with neighboring France spanning from roughly 1735 well into the early 1800s. Having just a single shot, often times the wielder might carry several pistols to have the advantage of multiple shots.

The original Long Sea Service models were issued with a 12-inch long barrel, as is this one. It has the long belt hook favored by the Navy. The lock is marked “TOWER” since it went through the inspection process and was approved at the Tower of London. The tail of the lock is dated “1739”. The barrel and tang are marked with a crowned “GR” (Georgius Rex or King George the II 1683-1760) with a downward pointing broad arrow as well as crowned scepters, proofs appropriate for the early-to-mid 18th Century. The left side of the breech of the barrel is marked “35”. It saw combat throughout many major campaigns during its life span including the French and Indian War, the American Revolution, the Battle of Trafalgar, and the War of 1812. Many captured weapons from the British would go into the hands of the Americans.

This piece came out of the late Lt. Col. Nicholas Belmonte collection, and was once part of the Norm Flayderman collection. The former published this piece in his book

The overall condition is very good. The action is strong and tight. The bore is smooth and in good condition. The does have a few period repairs and remains solid, nonetheless.