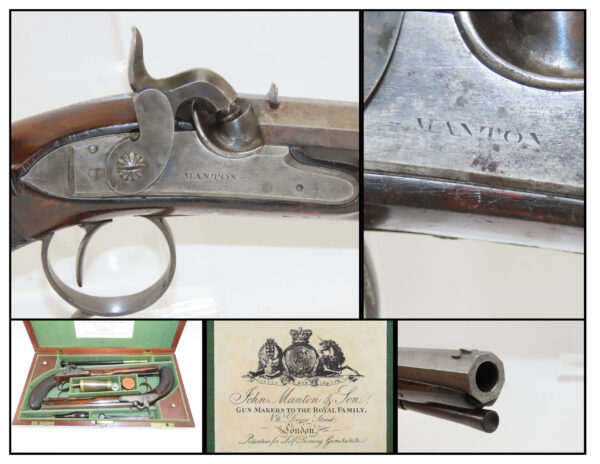 Here we present a pair of cased antique John Manton Dueling Pistols, made circa 1798 in London, England. London was for centuries a major weapon-making center for the world. The Manton family were a large part of the gun making tradition there. Brothers John (b.1752) and Joseph (b.1766) would become part of an elite membership of gunmakers known as “London’s Best”. John worked for Twigg—apparently as foreman—before opening his own shop at No. 6 Dover Street in London circa 1781 and his business continued until the 1830s. Joseph worked for some time for his older brother before striking out on his own to set up his shop circa 1789. Both brothers became known for their extreme quality and inventiveness.

These pistols would have originally been made in the flintlock firing system and thereafter updated to percussion. The finish work on the conversion is of commensurate quality to the guns themselves and may even have been performed by the maker’s shop. Each pistol features an octagonal barrel of 9-5/8 inches in .54 caliber, and each has a notch rear sight and blade front sight. The trigger guards have the additional space for the middle finger to grasp. The trigger guard, pommel cap and breech of the barrel are neatly engraved. “—MANTON * LONDON—” is inlaid in gold on the top of both barrel flats. Both locks read “MANTON”. This set is contained within a fitted, green felt-lined wooden case along with cap tins, powder flask, oiler, lead balls, and a bullet mold all in their own compartments.

The overall condition is fine. The actions are excellent. The smooth bores are in fine shape. All markings are clear. The checkering on the stocks remain sharp with some obvious signs of use—these pistols were certainly used! This is a lovely, encased pair of pistols from one of London’s Best families!