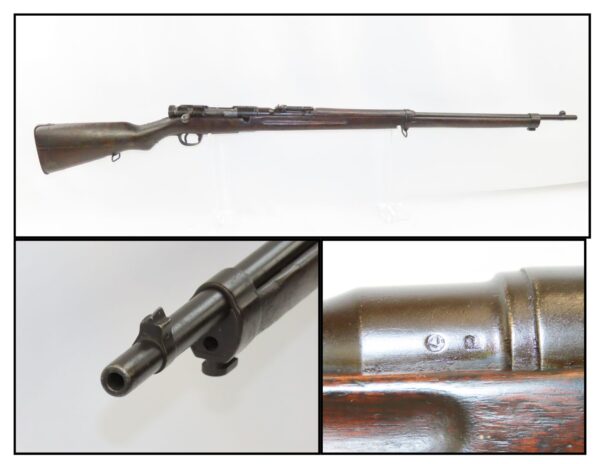 Arisaka by the Kokura Arsenal Circa 1937

Here we present a Japanese Kokura Type 38 Infantry Rifle, made circa 1937 at the Kokura arsenal. The Type 38 rifle and carbine were bolt-action service rifles used by the Empire of Japan predominantly during the Second Sino-Japanese War and the Second World War. The design was adopted by the Imperial Japanese Army in 1905 (the 38th year of the Meiji period, hence “Type 38”). Because the 6.5×50mmSR Arisaka cartridge it fired was considered underpowered, a replacement was devised, which was the Type 99 rifle, but both rifles saw usage until the end of the war. This rifle was an upgrade to the Type 30. This design was the project of Major Nambu, famed and prolific firearms designer in Japan. The Type 38 has been called the best service rifle of WWII. The design was perfected with the advent of the Type 99, nevertheless, the Type 38 saw plenty of action during World War I and World War II.

The action is strong. The bore is a bit dim with well-defined Metford rifling. The stock shows much wear but remains solid.