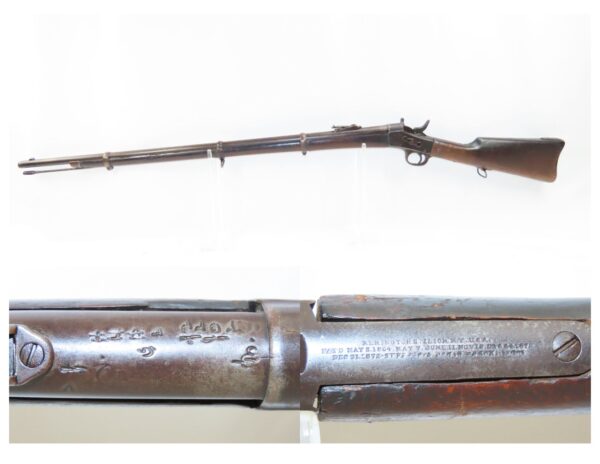 Here we present an antique Egyptian Remington Rolling Block Model 1868 No. 1 Military Rifle, made circa the early to mid-1870s in Ilion, New York. The Remington Rolling Block had a sturdy, simple action that was relatively inexpensive, just what many governments wanted in the latter half of the 19th Century. They were popular with civilians as well.

In 1868 a large order was placed with Remington by the Egyptian Government for the No. 1 Remington Military Rifle to be chambered in the “.43 Egyptian” cartridge. Governments at that time considering it a matter of national prestige to field arms with proprietary cartridges. Before the order could be delivered, Egypt (having close ties with the French since the Napoleonic excursions and the building of the Suez canal), “defaulted” so that a large part of the order could be sold to France as she was greatly under armed during the Franco-Prussion War of 1870-71. It is estimated that some 13,000 such rifles were delivered to France at that time. However, the original order was again placed and by 1876 the last of some 60,000 rifles were delivered.

Unlike this one, most Egyptian Remingtons that one is likely to come across (except for French marked specimens) show very substantial wear, especially rounded edges throughout, most noticeable at the muzzle, bayonet lug and butt plates, which often have holes in them or are missing altogether. The left side of the receiver is marked with a Crescent Moon and the initials E.P. within and is marked in Egyptian with unit markings. The upper tang bears the Remington patent markings, which are often worn completely off.

The overall condition is good. Strong action. Bright bore. This example has a bit of wiggle at the stock, due to the crude repairs at the wrist. Some chipping can be seen around the butt plate tang on the buttstock. Nice even brown patina on the barrel.