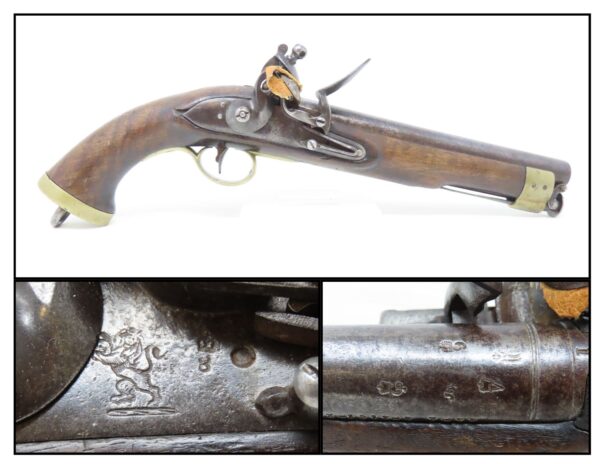 Here we present an antique East India Company Marked New Land Pattern British Cavalry Flintlock Pistol, made circa the early 1800s in London, England. Introduced in 1796 and in widespread production by 1802, the New Land Cavalry Pistol provided one model of pistol for all of Britain’s cavalry units such as the Royal Horse Artillery. Initially it started out with a rounded brass butt, but this soon gave way to a flat butt with a lanyard ring, as is this one. The ring on the later pistols allowed the pistol to be attached to the cavalryman’s equipment and not be lost in the heat of battle. The famous East India Company made many of these for British Cavalry serving in India, who in turn brought them into service elsewhere in the world.

Overall condition is very good. Strong Action. The big bore is in good shape. There is a stable crack on the left side of the stock. East India Company Lion engraved on the lock. The top of barrel is littered with proofs and “AOX-1217-8 X-73” (probably a modern registration number) is stamped on the left side. Here is a British style New Land Pattern pistol with lots of history!