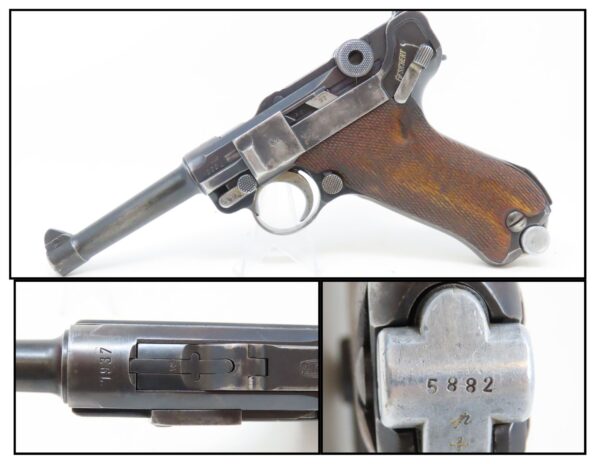 Here we present a Mauser Banner Luger Pistol, made in 1937. This is a very nice Commercial Mauser Banner Luger Pistol dated 1937 that is chambered in 9mm Luger. The top of the chamber is dated 1937 and it has the standard Mauser Banner trademark on the first toggle. This is one of the earliest pistols to sport the Mauser Banner. Based on Hugo Borchardt’s novel design of a semi-automatic pistol, the “Luger” pistol was designed by Georg Luger, the man tasked with taking an awkward, cumbersome and expensive pistol and making it into one of the world’s most iconic firearms of all time. The Model P.08 was adopted by Germany and was used through both WWI and WWII.

In the years prior to the pistol being made, the Mauser Banner didn’t appear on the handgun. Instead, interestingly, since the terms of the Treaty of Versailles only allowed Simson & Company to produce any of the few small arms granted Germany after World War I, arms production was done secretly at Mauser, among others. The “S” would stand for “Simson” to throw off suspicion, and “/42” was the rest of the code for the Mauser factory. Dates were left off of the barrel until about 1936 when Germany’s arms production and military activities started to be brought into the light.

The overall condition is near fine. Nice blue finish. The action is strong and tight. The bore is bright. Both grips show expected handling wear but remain good overall. The numbers match with the exception of the magazine base. A very nice Luger pistol from 1937!

Barrel is 4 inches in length.