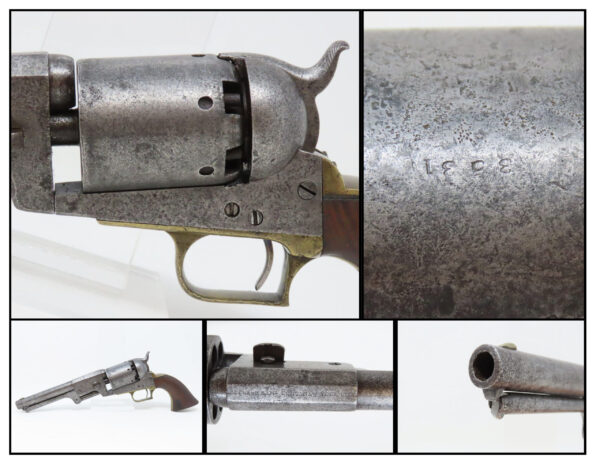 Here we present an antique Colt First Model Dragoon Revolver, made in 1849, in Hartford, Connecticut.

The Colt Dragoon revolvers are important descendants of the Colt Walker and were important as some of Colt’s first revolvers manufactured under contract with the U.S. government. Only 7,000 of these First Models were manufactured around 1848-1850. The three models of Dragoon revolvers were used by the 1st and 2nd Dragoons and Regiment of Mounted Riflemen on the frontier in the antebellum era and during the Civil War. Many of the Dragoons were used during the Civil War as well. There are portraits of Confederate and Union cavalrymen with various Dragoon models. This revolver was manufactured in 1848, the first year of production, and just one year after the Walkers. It features a German silver blade front sight, hammer notch rear sight, and matching numbers visible on the loading lever, wedge, arbor pin, cylinder, barrel, frame, trigger guard, and back strap. As mentioned, many were used in the American Civil War, though the Union would adopt the much smaller Colt 1860 Army, a much-streamlined version with the same .44 caliber firepower.

Colt’s Dragoons experienced some of the harshest conditions the mid-19th century had to offer, and it is amazing that any survived, in any condition. This pistol was designed for use by horse-mounted rifleman, and it is so much pistol that you will want a horse to carry it for you because of its significant weight. The serial number “3531” matches throughout.

The overall condition is good. Gray patina throughout. The action is functional—the cylinder indexes just fine unless the hammer is cocked very aggressively. The grips are solid. There is a crack in the bottom of the grip frame where the screw goes into the front strap that has been repaired. An attractive well-aged early Colt that certainly has the appearance of a weapon that saw serious use in battle. This is a great opportunity to add one of Samuel Colt’s most recognized inventions to your collection, a 1st Model Dragoon!