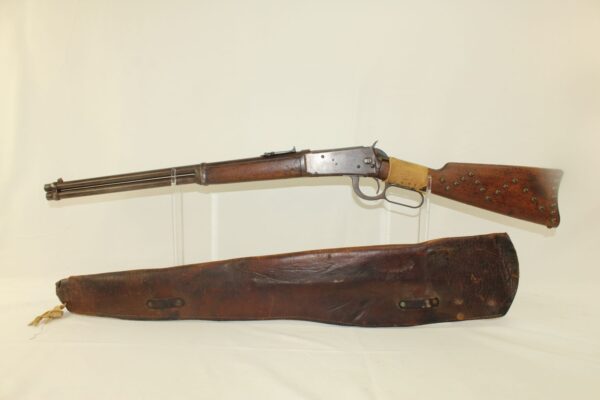 Here we present an antique Winchester Model 1894 Lever Action Carbine in .38-55 WCF, made in 1895 in New Haven, Connecticut. The credit for the design of such a prolific firearm again lies with John Moses Browning, who lent his extensive design talents to a large number of weapon types throughout his career. The Model 1894 was the first Winchester rifle made for use with the new technology of smokeless powder and was developed as a hunting rifle. Over 7.5 million were produced from 1894 until 2006. While various cartridges were supported throughout the run of the gun, the .30-30 Winchester became its staple. In practical use, the Model 1894 became a favorite for general shooters and hunters alike. To this day, it remains a deer hunting favorite, and, in all likelihood, more deer have been taken with the 1894 than any other.

This Model 1894 Carbine features a 20-inch barrel chambered in .38-55 WCF. The top of the barrel is marked “MANUFACTURED BY THE WINCHESTER REPEATING ARMS CO. NEW HAVEN CONN. U.S.A.”. The saddle ring was deleted long ago and has the same patina as the rest of the gun. This was likely done so as to be quieter. The butt stock is decorated with a series of brass tacks. The wrist has an old piece of buckskin stitched around for a better grip. The scabbard is high quality and stitched as well as riveted. The muzzle end of the scabbard has a small carved animal (quadruped) tied to it with some leather strips. This is a really neat old rifle and it certainly looks like it has been there and done that.

The overall condition is very good. The iron parts have a dark patina. The markings are clear. The walnut stock shows use and remains solid. The bore is bright with good rifling. The action is excellent. The scabbard is in very good condition or better. This rifle looks, smells and feels the part!