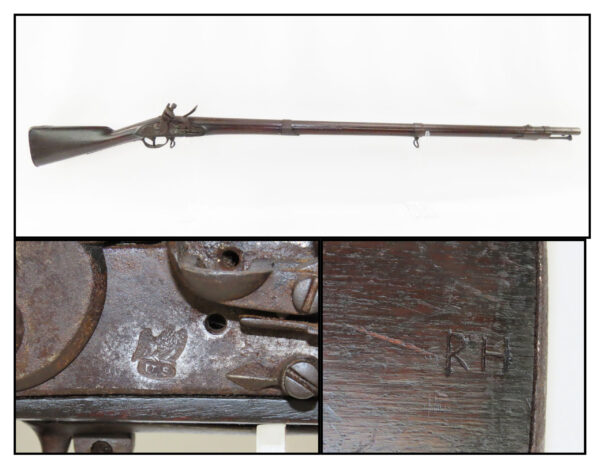 Here we present an antique U.S. Contract Model 1795 Flintlock Musket, manufactured circa the late 1700s to the early 1800s. These arms were patterned off the current production 1795 type muskets being made at the Springfield Armory and the Harpers Ferry Armory, although it wasn’t a true “Pattern”. The US didn’t produce a “pattern” or “model” musket until the Model 1812 was produced in 1815. In fact, the differences between the Springfield Model 1795 and the Harpers Ferry Model 1795 have led many to label the Harpers Ferry version as a totally differently model. There were quite a few independent contractors that made this musket, due to the constant demand.

The Model 1795 was a smooth bore, flintlock musket and the first weapon system to be produced within the United States. It was designed very closely patterning the French “Charleville” Flintlock Musket that was used to by the colonists against the British during the American Revolutionary War. Springfield Armory produced 80,000 of these, with Harpers Ferry responsible for another 70,000. A Production of this musket ran from 1795 through 1818. She found her way into some several important American conflicts of the time, including the War of 1812 between the United States and the British Empire, the Mexican-American War, and even the Civil War. The 1795 would also be taken along by members of the American expedition led by Lewis and Clark from 1803 to 1806. Use of the 1795 was recorded as late as 1865 for the southern Confederate forces who were still fielding her late in the Civil War.

“RH” and “ES”, for Elisha Shaw, are stamped on the buttstock. The left side of the breech has a “V” view mark and “P/RO” proof within a circle. The “RO” would be for Robert Orr, who was an inspector of these muskets during this period. “US” under a federal eagle is engraved on the lock.

The overall condition is very good. The action is strong. The bore is smooth and dark. This example has survived the test of time and remains in its original flintlock! Here is a very early American flintlock musket from the early Indian Wars, the War of 1812 and likely many other conflicts!