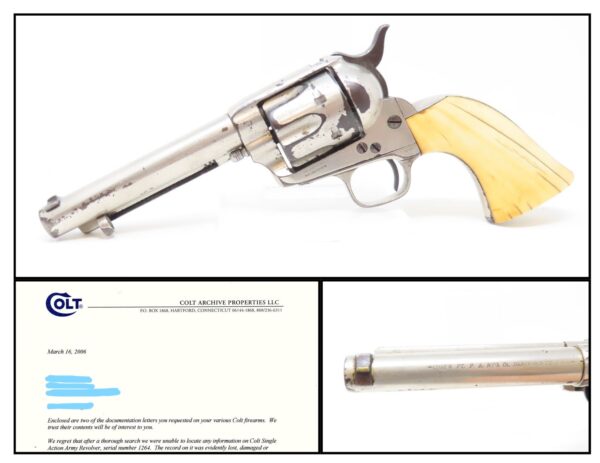 Here we present a Very Early Production Antique Colt Black Powder Frame Single Action Army Revolver in .45, manufactured in 1874 in Hartford, Connecticut. This SAA has a 4-digit serial number with numbers matching throughout. It wears an old nickel finish with a very dark plum patina showing through. The grip is ivory. This would have been a 7-1/2 inch barreled gun from the factory and it was cut to 5-inches at some point, and had both a front and rear dovetail cut for better/adjustable sights. The front sight remains, while the other was removed or knocked out. There is still the groove sight on the top of the frame and that would still suffice. The front sight blade is of brass and worn down to a nubbin. The initials “W.M.C.” are neatly scratched into the bottom of the grip frame. This was clearly a well-used and beloved companion, and though not factory original, it is a great showcase of how these working guns were modified, customized, decorated, or even rigged to keep working in the late-19th Century.

Two line patent address. There is a “0” mark on both the trigger guard and the loading gate. This one has a letter from Colt stating that there is no record found for this serial number. This is not uncommon. Per Graham, Kopec, and Moore in A Study of the Colt Single Action Army Revolver, records for guns under 30600 are incomplete.

The Colt “Peacemaker” was introduced in 1873 and has become one of the most iconic firearms in all of history, thanks to its widespread use by the U.S. military, civilians and, more recently, in Western films.