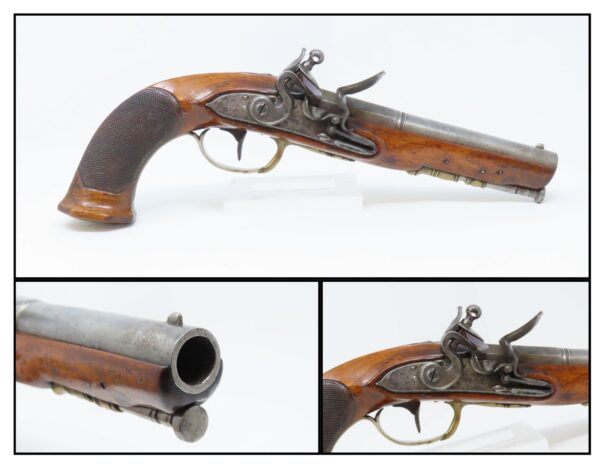 Here we present an antique French Flintlock Pistol in .54 Caliber, made circa the early 1800s. The First French Empire (officially the French Empire) was the empire of Napoleon Bonaparte of France and the dominant power in much of continental Europe at the beginning of the 19th century. A series of wars, known collectively as the Napoleonic Wars, extended French influence to much of Western Europe and into Poland.

This pistol is a good size for the belt and has a .54 caliber smooth bore. Brass hardware. It would have been good for private military purchase or perhaps even carried by a French trapper in the New World.

The overall condition is very good. The action is strong. The lock still sparks. The stock is solid with expected wear. Lightly carved stock on the backstrap. Good smooth bore. Obfuscated remnants of engravings can be seen on the barrel top. Here is an impressive example of a big-bore pistol from the early 19th Century!