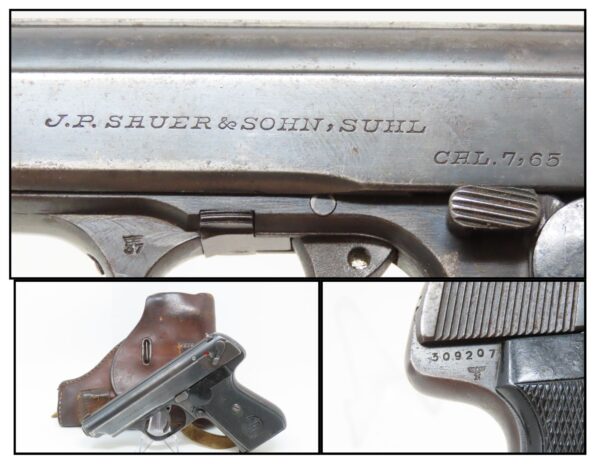 Here we present a J.P. Sauer & Sohn Model 38H First Model (2nd Wehrmacht Variant) Pistol manufactured circa 1939 in Suhl, Germany with a production run from 1938 through the end of World War II in 1945 with approximately 200,000 examples made. The “H” in the model number indicates this pistol uses a shrouded hammer as opposed to the striker style firing of earlier Sauer models. This pistol was issued to the German Army and was a favorite of the Luftwaffe as it could be carried while parachuting behind enemy lines. The Eagle over 37 proof mark on the trigger guard is a Military acceptance mark indicating that this pistol was issued to the German Army instead of the police.

The Sauer 38H was produced in three basic models. The slide of the first model says “JP Sauer und Sohn” on the left along with the caliber. The second version says only “CAL 7.65”, and the third version omits the safety and the cocking/decocking lever. Towards the end of the war, weapons produced were simplified for quicker, cheaper production. For the 38H, this meant simpler markings, rough finish, and the elimination of features like the slide-mounted safety.

The overall condition is fine. Original blue finish. The action is excellent. The bore is mirror bright with sharp rifling. Both grips are firm with and show minimal handling wear. The holster is in good shape. There is a stamp on the inside of the of the holster flap that is not legible. This is a great opportunity to