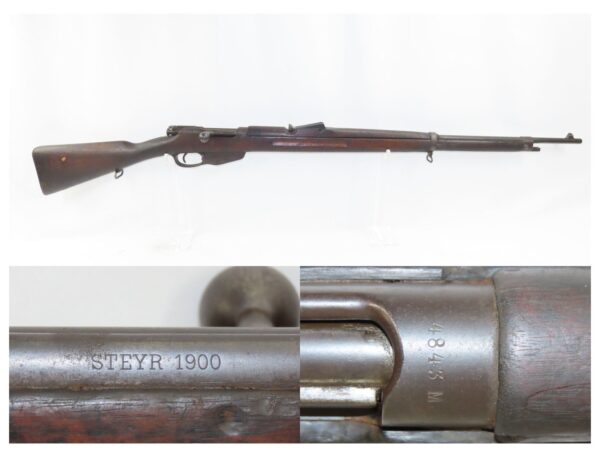 Here we present a C&R Dutch Contract Steyr Geweer Model 95 Straight Pull Mannlicher Rifle, made in 1900 in Steyr, Austria. The Geweer Model 95, also known to collectors as the Dutch Mannlicher, was the service rifle of the Armed forces of the Netherlands between 1895 and 1940 which replaced the obsolete Beaumont-Vitali M1871/88. At first it was produced by Steyr for the Dutch, as is this rifle, but after 1904, production took place under license at Hembrug Zaandam in the Netherlands. Including the Dutch made examples, the Dutch issued about 470,000 M.95s.

It chambered the 6.5x53mm Mannlicher cartridge. In the 1880s, the bolt-action rifle was a very innovative firearm. One of the leaders in the design of these guns was a man named Ferdinand Ritter von Mannlicher. Mannlicher invented a straight pull, bolt action rifle that fed from an internal box magazine. In 1885, Mannlicher combined his efforts with the Austrian Arms Factory company at Steyr and formed the Steyr Mannlicher group to produce a new rifle that fired black powder 8x50R cartridges, the Model 1888. The gun was a success with the Austrian Army, but in 1893 smokeless powder caught on and replaced black powder practically overnight. Thus, the Austrians needed another new gun, and that is when Mannlicher came out with the Model 95.

Based on his previous M1890 design, this rifle was manufactured in the Austro-Hungarian Empire at state arms factories in Steyr (Austria) and Budapest (Hungary). More than 3 million of M95 rifles were produced between 1895 and 1918. A full-length wooden stock covered almost all of the metal surfaces to make it “soldier proof”. The straight pull design was so fast acting that the German soldiers that used the rifle in World War II called the M95 the “Ruck-Zuck”, meaning very quick.

The overall condition is good. Strong action. Semi-bright bore with metford style rifling. The stock is solid with an above average amount of wear. A repair to the stock can be seen near the barrel tang. The numbers do not match.