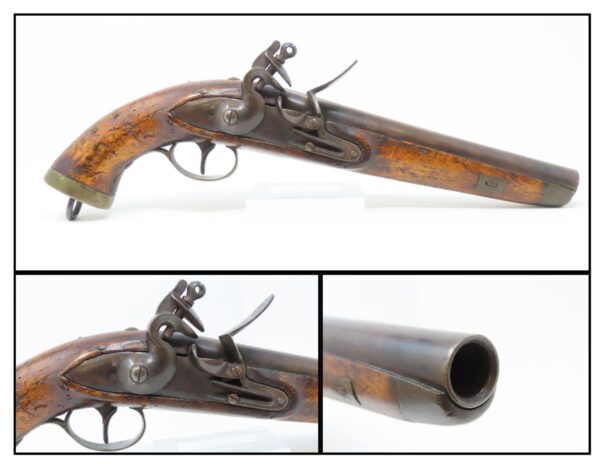 Here we present an antique Dutch Military Flintlock Pistol, made circa the early-1800s in Liege. Today we know that Liege is a city in Belgium, perhaps most famous for its centuries of arms manufacture; but at this time, Belgium was not yet independent, and was a parcel of the United Kingdom of the Netherlands until recognized in 1839. This period in history was dominated by Napoleon Bonaparte and his wars of conquest. Interestingly, the Netherlands was a part of the French Empire from 1795 to 1813, and Napoleon renamed it the Batavian Republic, then the Kingdom of Holland, according to his purposes. During this time, the Dutch military fought alongside France against Napoleon’s many enemies. After Napoleon’s defeat in 1813, William I was restored to the head of the government, and in 1815 he declared himself king in the face of Napoleon’s return from Elba. William I’s son, the future King William II fought Napoleon at Waterloo.

This pistol features a large .70 caliber bore, typical of a military small arm of the period. The pommel is a flat one with a lanyard ring. No provision for a ramrod was made as the user carried one secured to his belt. This would have been one of the last large, smooth bore flintlock pistols to be made for official service before pistols in the percussion firing system and then shortly after cartridge firearms were introduced and adopted.

The overall condition is good. Strong action. Good bore for its age. The stock is solid, with an expected amount of wear. It does contain a period repair on the left grip and spots of “worming”. A neat piece that would look great on display!