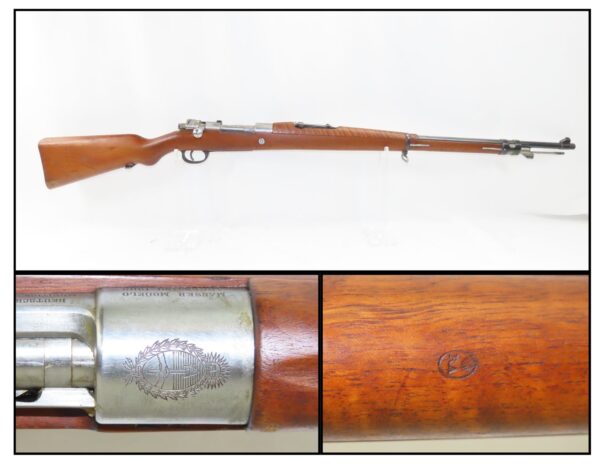 Military Rifle Produced in Berlin, Germany to Replace the M1891!

Here we present a C&R DMW Argentine Contract Model 1909 Mauser Rifle manufactured at Deutsche Waffen und Munitionsfabriken, or DMW, circa the 1930s in Berlin, Germany. There were approximately 285,000 of these rifles produced over the production run of 1909 through 1959. The Argentine Mauser Model 1909s were Gewehr 98 pattern bolt-action battle rifles designed for the Argentine Army. They were produced both in Germany and in Argentina.

The M1909 was also able to use the bayonet of the Mauser 1891 it replaced. The main producer in Germany was Deutsche Waffen und Munitionsfabriken that delivered 200,000 rifles while around 85,000 rifles were manufactured by the Fabrica Militar de Armas Portatiles, governmental plants in Rosario and Santa Fe. The Model 1909s were replaced by FN FALs without having seen combat.

The overall condition is very good. Excellent action! The bore is in good shape. This example sports a solid stock all around. The numbers match, including the cleaning rod, except the bolt does not match. The bolt release is a replacement. Here is a top notch German infantry rifle for the collection!