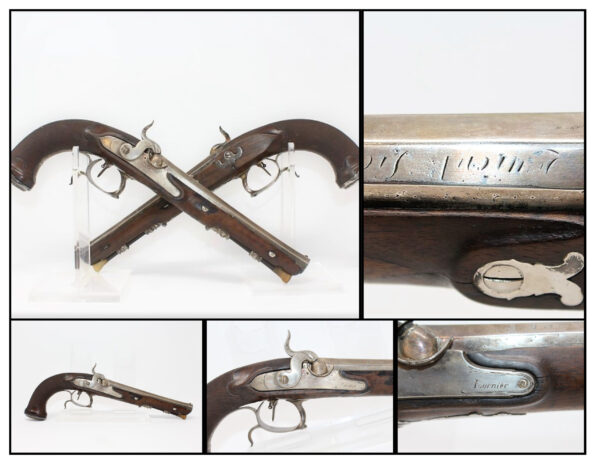 Here we present a framed pair of antique Imperial French Officer’s Pistols, made circa the first half of the 19th Century. The First French Empire (officially the French Empire) was the empire of Napoleon Bonaparte of France and the dominant power in much of continental Europe at the beginning of the 19th century. A series of wars, known collectively as the Napoleonic Wars, extended French influence to much of Western Europe and into Poland. At its height in 1812, the French Empire had 130 departments, ruled over 70 million subjects, maintained an extensive military presence in Germany, Italy, Spain, and the Duchy of Warsaw, and counted Prussia and Austria as nominal allies.

This is a nice looking pair of French Officer’s Percussion pistols, which started out as flintlock pistols, and were later converted to percussion circa the 1830s. These pistols were originally made by a French gunmaker (possibly Paris gun maker Jean Andres LePage, who worked from 1792 until 1854) and then converted to percussion with new breeches being added by Fournier of Paris, who worked from 1823 until 1872. Each pistol is equipped with a single set trigger which the user can push forward for a lighter, crisper trigger pull. Ramrods are tipped with horn. Though not verified, the previous owner of these pistols stated that these pistols came from a castle in Scotland.

The overall condition is good. The steel surfaces bear a thinning silver finish. The lock markings are legible but those on the barrels are a bit shy. The stocks are in good shape with small, hairline cracks throughout. The bores are in great shape, clean with defined rifling. The actions are excellent. Here is a very attractive and very displayable set of French pistols!