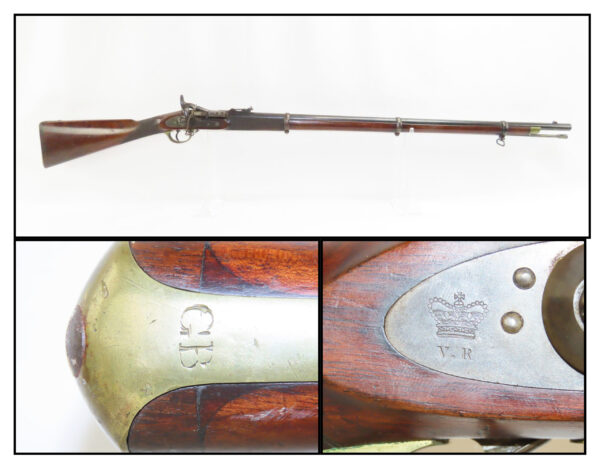 Here we present an antique Snider-Enfield Breech Loading Rifle in .577 Snider, originally made by Richard Jackson of London, England, circa 1862 and converted in the late 1860s. Richard Jackson was a high-end London gunmaker located at 50 Portman Place, Edgware Road. He was especially known for his fine hunting arms. This rifle was probably produced by him for an officer, given its clear superiority to average Snider rifles. The lock was made by London Arms Co.

This piece is a fine, deluxe model that features excellent hand-checkering on the wrist and the forestock, as well as beautiful fit and finish. “143” and “R. JACKSON EDGWARE” are stamped onto the bottom of the buttstock. “1862/L.A.Co.” and “crown/V.R” are marked on the lock for London Arms Co. and Victoria Regina or Queen Victoria. “GB” is engraved on the buttplate tang.

American inventor Jacob Snider designed the conversion for rifle-muskets to be turned into breech-loading firearms. Britain had used the Enfield Pattern 1853 rifle-musket for a decade when breech-loaders came on the scene. Many of the major powers at the time faced a similar problem in that their arms suddenly became obsolete, and not wanting to throw over all their small arms at once, they converted them with this system. Despite being obsolescent in many ways, even at inception, this “trapdoor” style of making single-shot muzzleloaders into single shot breech-loaders lasted for several decades. The British Empire adopted this technology in 1866. Other nations soon followed suit, including the United States of America, which used a very similar method called the Allen Conversion to achieve the same goal.

The overall condition is fine. Original finish. The action is strong all around. The bore is shiny bright with nice rifling. The checkering on the wrist and fore end are sharp. This is a stunning piece of history that is a study in markings and may yet reveal more information!