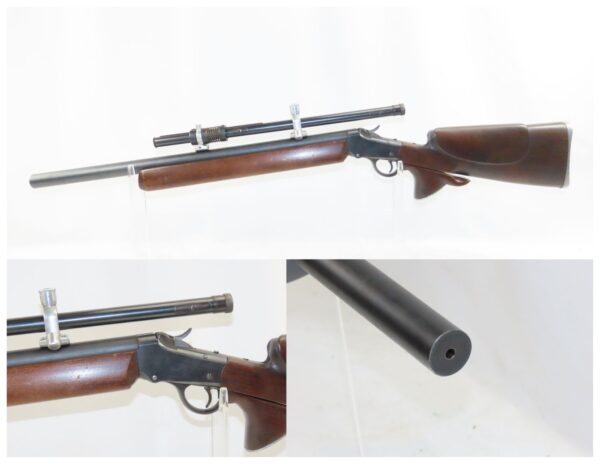 Here we present a Winchester Model 1885 Low Wall Rifle, originally made in 1889 in New Haven, Connecticut, Later Converted to .22 Hornet after 1930. The Model 1885 Single Shot rifle was famed gun designer John M. Browning’s first design and patent, and it was the first single shot to be built by Winchester. The patent for the Model 1885 rifle was what brought Browning and the Winchester Repeating Arms Company together for the beginning of their eventual 19-year association. Nearly 140,000 Model 1885s (both Low Walls and High Walls) were manufactured from September 1885 to June of 1920.

This one has been highly customized with a heavy bull barrel chambered in .22 Hornet, which was a cartridge that was introduced in 1930. Design was based on the black powder .22 WCF at Springfield Armory, among the designers Townsend Whelen. This cartridge is capable of velocities of over 3000 fps and is considered most useful for varmints and predators.

This rifle also features a customized stock with a pistol grip mounted to the breechblock lever and a Malcolm 3x fixed power scope with adjustable Unertl mounts. A one-of-a-kind!

The overall condition is near fine. Customized. Excellent action. Bright and nicely rifled bore. Fine stock containing less than average handling/storage wear. The scope has a clear sight picture and both lens caps are present.