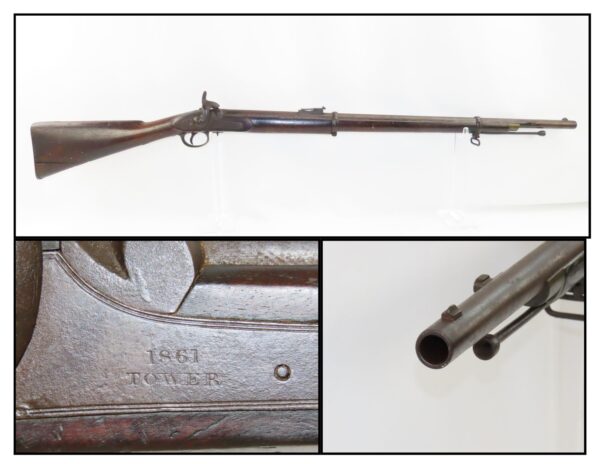 British Import to the CSA via Blockade Runners

Here we present an antique CSA Civil War Import British Pattern 1853 Enfield Percussion Musket, made in Birmingham, England in 1861. The P-1853 was Britain’s adopted rifle from 1853 until the Snider system was adopted to transform arms into breech-loaders. In addition to its use around the world with the British military, this was one of the most popular arms for the infantry during the American Civil War. Of all the British arms, the Pattern 1853 is perhaps the best known and regarded weapon that replaced all earlier infantry models in the British Army.

The Enfield 1853 rifle-musket was used by both the North and the South in the American Civil War and was the second most widely used infantry weapon in the war, surpassed only by the Springfield Model 1861 Rifled Musket. The Confederates imported more Enfields during the course of the war than any other small arm, buying from private contractors and gun runners. It has been estimated that over 900,000 P53 Enfields were imported into America and saw service in every major engagement of the war.

This musket has the double Crown “SHC” markings just behind the trigger guard, the mark of dealer/agent Sinclair Hamilton & Company—a very important supplier to the Confederacy due to their consistent arms shortages and inability to make their own weapons. The left side of the barrel bears the commercial Birmingham proof marks. There is a faint marking, possibly a number, atop the breech of the barrel. The bore was bored out long ago to .60 caliber.

The overall condition is good. Dark, untouched patina. The action is strong. The bore is smooth and dim. The toe of the musket has been repaired and is solid. This is a fantastic piece of history that would display well in your collection.