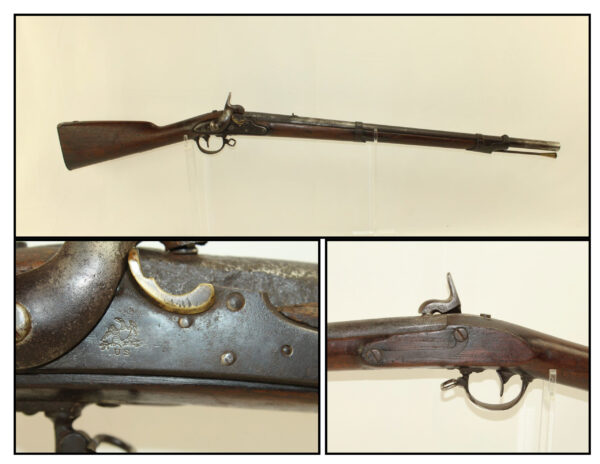 Here we present an antique Springfield Armory U.S. Model 1840 Musket, manufactured circa 1843 in Springfield, Massachusetts. This .69 caliber musket originally would have had a flintlock firing system and a 42-inch barrel before being converted to percussion, possibly before it ever left the factory. This one has since been shortened to 29 inches. More than 30,000 were produced by the Springfield Armory and two independent contractors, D. Nippes and L. Pomeroy, between 1840 and 1846.

The designers of the Model 1840 anticipated that the musket would eventually be rifled and made the barrel heavier than the earlier Model 1835 accordingly. The Model 1840 was the last flintlock musket produced at Springfield Armory. Many were converted to percussion lock before they made it to the field. Although produced as a smoothbore musket, most of the Model 1840s had their barrels rifled later, as the designers had anticipated. These would go on to be used by both sides during the American Civil War. This would have been transformed from an infantry weapon to one that would have been handy for a cavalryman.

The last owner of this old musket passed along the oral tradition that this one was a Confederate weapon.

The lock is marked “SPRING/FIELD/1843” and has the Federal Eagle stamp. The brass tipped ramrod is threaded on the breech end.

The overall condition is good. The iron parts show much use and weathering. The markings are legible. The walnut stock is solid, with a hint of an inspector cartouche on the left stock flat. A bit of loss there behind the hammer that is dark and smooth with age and handling. The bore is smooth and dark. There are visible saw marks at the muzzle and the cut to the stock that are both dark with age and well worn, confirming that this was indeed done during the period of use. The action remains strong. There was a shortage of weapons during the Civil War that effected both combatants, but primarily the South in the long-term. Confederate guns are almost trademarked by crudeness and extreme hard use. While this musket was made in the more refined setting of 1843 Springfield, Massachusetts, it certainly displays the crudeness in the rough sawn barrel and the evident hard use and weathering shows on the metal parts and the stock.