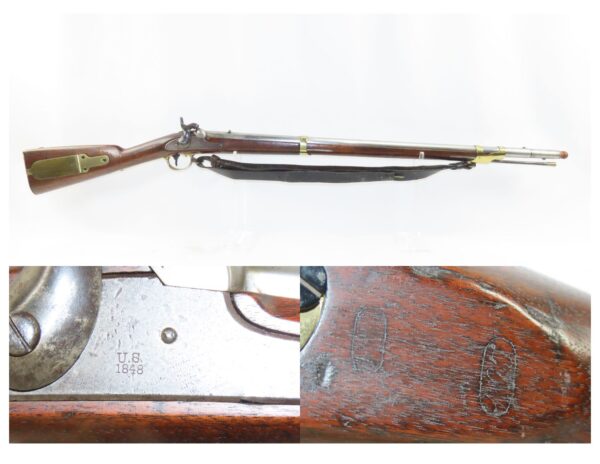 Here we present an antique Confederate Marked New York State Documented U.S. Model 1841 Grosz Alteration “Mississippi” Rifle-Musket, made on contract by E. Remington in Herkimer, New York in 1848/49. Remington contracted with the U.S. Government for 20,000 of these “Mississippi” rifles, delivered between 1846 and 1854. In the case of this rifle, it was one of 5,000 held at the Watervliet Arsenal in New York in 1861 that was sent back to Remington for alteration to accept a bayonet. Since there weren’t enough saber bayonets available, 1,600 were then altered by Frederick Grosz to take a socket bayonet by turning down the muzzle, attaching a stud to the bottom of the barrel, and fitting a new small front sight.

As if this rifle wasn’t scarce enough, it also has a “Q” marked just forward of the trigger guard, which is characteristic of Confederate guns that were sent to a Southern armory for work or refurbishment during the war. It would appear then, that this Union rifle was captured at some point (i.e. a battlefield pick-up) and continued to be used in the hands of the enemy. These were highly desirable guns on both sides. Southern states already had plenty of the Model 1841 in their arsenals prior to the war.

As mentioned, this example was altered on contract with the State of New York by Frederick H. Grosz circa 1861 for use with the included U.S. Model 1840 socket bayonet. Grosz alteration Remington Model 1841 rifles are described on pages 167-168 of George D. Moller’s book American Military Shoulder Arms Volume III with the muzzle end of this exact rifle photographed on page 167. It also includes a Watervliet Arsenal leather sling and tools in the buttstock. Both sides used this rifle during the American Civil War. Government arsenals that were in the Confederacy at the time of the rebellion had a number of these in them.

The overall condition is very good. Strong action. Bright and nicely rifled bore. Fine stock, remains solid and contains 2 cartouches on the left wrist. “1848” dated lock. “1849” dated barrel tang. “US” stamped lock, barrel, butt plate tang, and bayonet. Both the Watervliet sling and bayonet are in good shape. Excellent craftsmanship on the altered muzzle. “Q” stamped just in front of the trigger guard on the bottom of the stock.