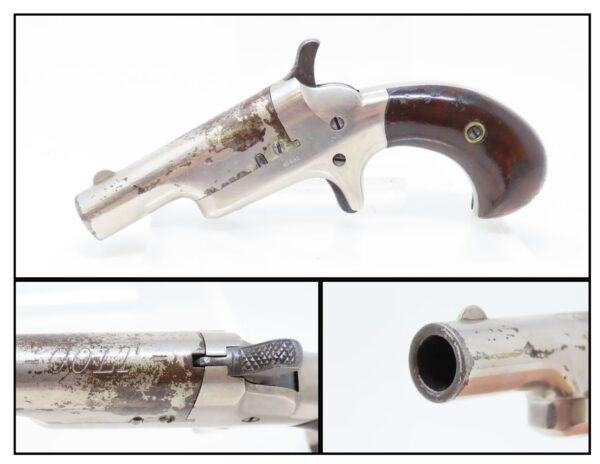 Here we present a British Proofed C&R Colt Third Model Thuer Deringer, also known as the New Model Deringer, made between 1875 and 1912. During this span, Colt manufactured 45,000 of these deringers. The serial numbers series ran from 1 to 45,000, though the yearly production numbers are not known. In 1870 Colt purchased National Arms Company and began producing a Deringer pistol based on its design. This became Colt’s First Model Deringer and it was Colt’s first single shot pistol. It was followed in quick succession by a very similar pistol, called Colt’s Second Model Deringer. Both of these pistols were chambered for .41 rimfire and featured a barrel that rotated counter-clockwise for loading and unloading.

In the same year, a Colt employee, F. Alexander Thuer, patented an altogether different design. His Deringer had a barrel that pivoted to the right on a vertical axis for loading and unloading. Instead of using a manually operated latch to open, his used a very positive, spring-loaded catch and detent that did not require anything but a firm twist of the barrel. This spring-loaded catch also acted as an automatic ejector, which was very handy for a single shot self-defense pistol. These were sold alongside the other two models as the Third Model Deringer but are now known to many as the Thuer Model. The Thuer was far and away the most successful of the three. These were very refined, very handy conceal and carry pieces all the way through 1912, when semi-automatic firearms took the lion’s share of the market.

The overall condition is fine. Original nickel finish has been preserved. The bore is bright and contains a few spots of pitting. Strong action. Both grips are in good shape. Here is a small collection piece that will have a prodigious impact!