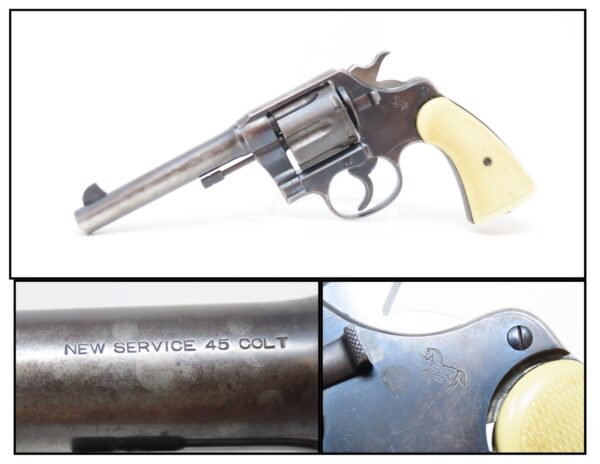 Here we present a Colt “New Service” Model double action revolver, made in 1923 in Hartford, Connecticut. The Colt New Service is a large frame, large caliber, double-action revolver made by Colt from 1898 until 1946.

In 1898, Colt Firearms released a new six-shot revolver chambered for the .45 Long Colt cartridge as the Model 1898 – better known as the “Colt New Service”. The New Service line would end up being produced from 1898 to 1946 to the tune of over 356,000 examples by the Colt Patent Firearms Manufacturing Company. The New Service line was adopted by the United States military through the Army, Marine Corps and Navy service branches, these under the designation of “Model 1909” and retaining the .45 Colt chambering. Not surprisingly, the New Service line managed to see operational use from 1898 into 1946, encompassing World War 1 (1914-1918) and World War 2 (1939-1945) as well as a plethora of other conflicts in between. Some also found their way onto the battlefields of the Vietnam War (1955-1975). First use of the New Service revolver was in the 1898 Spanish-American War.

As New Service revolvers were produced in the hundreds of thousands and proved highly reliable and robust battlefield weapons while also lending themselves to the civilian market, it was no surprise that the New Service was still in circulation by the time World War II rolled around. Many New Service revolvers were given up after 1946 though limited stocks still persevered into the more modern “Cold War” conflicts from then on.

The overall condition is fine. Original finish. The action is as strong as ever. The bore is bright throughout! The markings are sharp. Here is a truly hearty double action Colt in .45 LC!