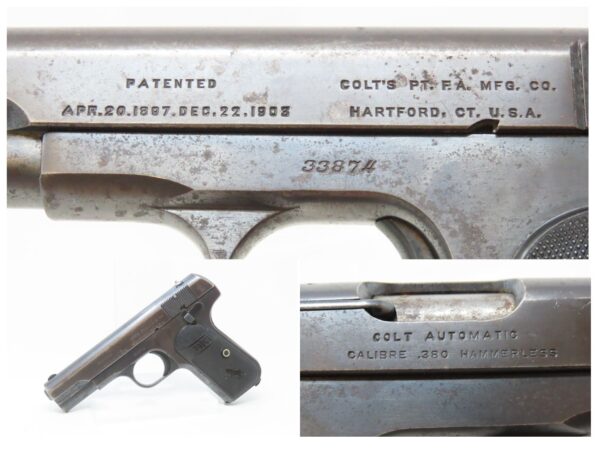 Despite the title “hammerless”, the Model 1908 does have a hammer. The hammer is covered and hidden from view under the rear of the slide. This allows the pistol to be carried in and withdrawn from a pocket quickly and smoothly without snagging. Approximately 570,000 Colt Pocket Hammerless pistols were produced from 1903 to 1945, in five different types. Some were issued to U.S. Army and U.S. Air Force general officers from World War II through the 1970s.

Many gangsters of the pre-World War II era favored these Colt Hammerless pistols because they were relatively small and easily concealed. It is said that Al Capone kept one in his coat pocket and Bonnie Parker used one to break Clyde Barrow out of jail after smuggling it into the jail by taping it to her thigh. Bank robber John Dillinger was carrying this model of pistol when he was shot by FBI agents outside the Biograph theater on July 22, 1934.

The overall condition is very good. Robust action. Bright bore. Original finish/patina has been preserved. Both grips are firmly seated, despite the right side missing a chip around the screw.