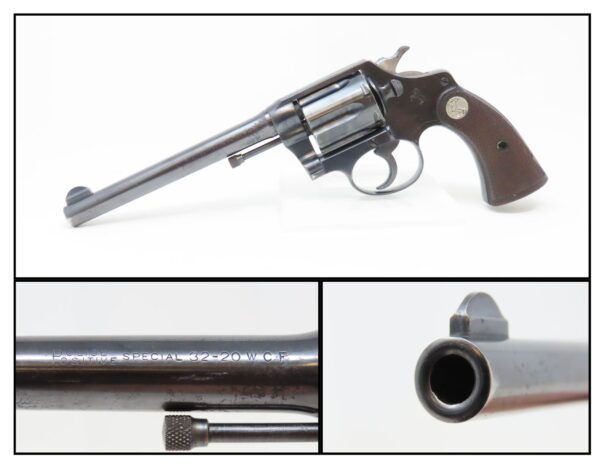 Here we present a C&R Colt Police Positive Special made in 1924 by the Colt Manufacturing Company with a production run from 1907 through 1995 in Hartford, Connecticut. The Colt Police Positive Special is a medium-frame, double-action revolver featuring a six-round cylinder, primarily chambered in the .38 Special caliber. It was designed primarily for sale to federal, state, or local law enforcement agencies and enjoys the distinction of being Colt’s most widely produced revolver design with over 750,000 built.

The Police Positive Special was a small improvement over Colt’s earlier Police Positive model, the only differences being a slightly lengthened cylinder and elongated and strengthened frame to allow the chambering of the longer, more powerful .32-20 Winchester, as is this one, and .38 Special cartridges. It was also made in .32 Colt New Police and .38 Colt New Police. It was made with 4″, 5″ and 6″ barrels and came with either wood or hard rubber grips.

At the time of the Police Positive’s introduction, the American civilian revolver market was still dominated by .32 caliber revolvers, and the .38 Special cartridge did not catch on with civilians until well into the 1920s. In addition, there was a specialized segment of the revolver market that Colt had been addressing for many decades. Colt had long offered revolvers chambered for the popular .32-20, .38-40, and .44-40 Winchester cartridges. The convenience of a common cartridge for one’s long arm and sidearm had obvious advantages, and the popularity of such rifle & revolver combinations grew quickly with American shooters. At the time, rifles firing the .32-20 were the most popular “varmint guns” because they provided accuracy and sufficient killing power with low levels of penetration, noise, and pelt damage. For those reasons, rifles and handguns firing these cartridges were very popular with varmint hunters, trappers, and farmers.

The overall condition is fine. Original blue finish is bright. The action is strong all around. Both grips contain sharp checkering and a Colt prancing pony emblem. The bore is bright throughout. Numbers match. A great old gun for law enforcement in a classic cartridge!